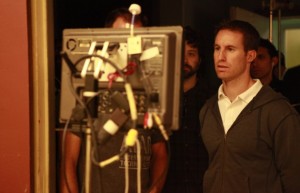 From the producer of The Conjuring and Annabelle, Peter Safran, comes the faux documentary horror film The Atticus Institute, available from today on DVD and Blu-ray. Written and directed by Chris Sparling (Buried and ATM scribe) in his directorial debut, The Atticus Institute is set in 1976 in a psychology lab specialising in unexplained phenomenon. When one of the lab’s patients, Judith (Rya Khilstedt) displays symptoms that the medical team have never witnessed before it’s not long before the Department of Defence muscle in with their own ulterior motives.
Alongside Khilstedt, The Atticus Institute also stars William Mapother (“Lost”), Harry Groener (“Buffy The Vampire Slayer”), John Rubenstein (“Angel”) and Sharon Maughn (The Bank Job). In celebration of today’s release we spoke to Sparling all about creating such a credible piece of fiction and what made him decide to jump behind the camera for this specific story…

SCREAM: The film went down really well at the Glasgow Film4Frightfest recently and is all set for release on DVD in the UK.

Chris Sparling: Yeah, I was super excited to learn it was going to be playing in Glasgow as I found out by accident. No one told me and I think I just saw someone on Twitter saying they’d be seeing The Atticus Institute in Glasgow and I was like, “Really?!?”

SCREAM: You’d dabbled a little bit in direction before with An Uzi at the Alamo and also Balance but that was a while ago. What was it about The Atticus Institute that convinced you to get behind the camera?

CS: Well I didn’t go to film school and those two films you reference were basically my film school. They were completely low budget, amateur learning and they were my source of learning. What happened is that since then I have written a number of scripts, some of which I was lucky enough to have made, and I got to the point where I wanted to direct the next thing that I wrote so I had to conceive of a movie that I could propose to someone that made sense in all possible ways and that included me directing. That’s how the idea was born for The Atticus Institute.
I came up with the faux documentary style because I knew that, in a way, that would be cheaper to make because half of the movie would be like your standard talking-head interviews. Another reason I chose this film to direct was the fact I’m a fan of genre movies and also with horror/thriller movies you don’t generally have to rely on A-list actors. My goal was to just cast the strongest and most talented actors that weren’t very familiar faces, so it became a proposition where I was putting forward more than just a script I wrote and more of an entire package that I was proposing.

SCREAM: You say you wanted something easier to make but you always seem to lay down the gauntlet for yourself. Your previous script, Buried, must have been a logistical nightmare as it was all set inside a box. This faux documentary can’t have been as simple as you say given all the false stock footage and photos, etc…

CS: It was more of a challenge than I realised. It was certainly the most different script I have written. I wrote the whole thing in sequence, despite there being the present footage and the older footage. In a way it was liberating because normally when you are writing a screenplay concision is your aim when it comes to your dialogue. With The Atticus Institute, in efforts to make it seem as real as possible it was liberating in the fact we would be using a lot of interviews so I could basically write a bunch of monologues for the interviews and at times what they are saying could drift a bit from what is exactly the point. That is what people do when they speak, like you and me are doing right now, so it added to the realism and was kind of free but at the same time I couldn’t make a movie that was just people talking and talking so at the same time I had to eventually rein it back in. It was a difficult script to write and then, when we started putting the movie together, I hadn’t realised there would be so many more moving parts to this machine: the talking-head interviews, the photos, the archival footage. It became a period piece and with two different actors playing the same roles so yeah, there were a lot of moving parts that I hadn’t seen coming.

SCREAM: How difficult was it to cast two people to play the same person?

CS: I had a great casting director from Bass Casting and they knew exactly what I wanted. Obviously, first and foremost you want to get the most talented actors you can and secondly, I told them I wanted people that weren’t immediately recognisable because I just wanted it to be as close to realistic as possible. They did a great job of giving me options and from that I narrowed it down and had my auditions and call-backs. I was really fortunate to get William Maputher who is probably the most recognisable person in the movie. It’s funny because I loved William for the role and he is who I wanted because physically he is who I kind of had in mind. Also he is a great actor and in a lot of ways was a cut above a lot of the other actors I saw for the role. My only reservations with William was the fact that I knew him from other things but I just felt he was too good to not cast him. Then I was very lucky also with Rya Khilstedt, who plays Judith, who just came in and there was minimal adjustment on my part because she came in an did exactly what I was hoping someone would do. I had a lot of women that came in and they were really big with the possession thing but I wanted someone come in and do the exact opposite. I wanted someone who appeared to be hiding a secret, which is she is, and Rya did all of that all on her own really.

SCREAM: A lot of people file The Atticus Institute under found footage but you don’t consider it as that and refer to it as more of a pseudo-documentary.

CS: I get why people would say it’s a found footage film but I just find that the term found footage isn’t really applicable to ANY movie anymore, not just mine. I don’t think there’s anyone pretending that their footage was found. That worked for The Blair Witch Project and maybe for Paranormal Activity but those days are gone; all you need to do is go to IMDb and realise that they are all movies and those are all real actors so I think the term is fairly antiquated by this point. With The Atticus Institute it’s set up to be a documentary and with any documentary you always have old photos and old archival footage so that’s why I don’t really class this as a first-person/found footage movie because it’s not someone being followed around the entire time with a camera.

SCREAM: Are you a fan of documentaries and are there any specific ones that inspired the style used for The Atticus Institute.

CS: Oh yeah. It’s strange but the movie that informed me the most was actually another fake documentary called Death of a President. It was about the assassination of George Bush so obviously it was fake because Bush was still in office at the time and I just found it fascinating how they were able to create and tell this story that was so riveting and I just completely went along for the ride, even though I knew George Bush was alive. Then, as far as real documentaries go, I watched Bobby Fischer Against the World and another one about chimpanzees but the name completely escapes me right now but it was really well done. I’m a big fan of documentaries. They are kind of my go to thing, especially when I’m travelling. There’s just a very informative and instructive element to documentaries that you don’t get from most narrative films and maybe that’s why I wanted to tell The Atticus Institute the way I did. I didn’t particularly want it to be instructive but I wanted to lean heavily on the scientific aspect of possession as opposed to approaching it from the more standard religious or cinematic approach.

SCREAM: Yeah, it’s a very different take on possession. Where did the idea stem from?

CS: Well I’d been walking around for a long time with this question in my head that wasn’t even an idea for a movie. I don’t know if possession is real or if there is anything supernatural and there are some days I do think it is real and some days that I don’t. What always tipped me more to the direction of “I guess it’s all bullshit.” is the fact that the government never got involved. From where I stand, you hear all these stories about possession and people are reportedly able to move stuff with their minds and do impossible things with their bodies and if that were real there’s no way the government wouldn’t have gotten involved because these people and their abilities would be a threat to national security. You can’t just let people roam around like that. What if they did something to the President, you know? To me, that was always the definitive proof so that was where the film became a story because it asks what if the government became involved? That was the true genesis of the film, to answer that question.

SCREAM: And finally, could you tell us a little about what you have planned as I know you are working on various things?

CS: I have a few directing projects that I am considering right now. They are not far along enough yet for me to give you the specifics on them but I do have writing projects. I’m adapting a novel for Warner Brothers and Leonardo DiCaprio called Blood on Snow and I also have a movie coming out later this year which I wrote and produced called The Sea of Trees that Gus Van Sant directed and stars Matthew McConaughey and Naomi Watts and Ken Watanabe. There are a few other things too so I’ve been busy which is something I’m grateful for.

SCREAM: And are you still going ahead with Down a Dark Hall with Buried director, Rodrigo Cortés?

CS: Yes and I’m loving that. I was brought on to rewrite it and I’m happy to be working with him again as he is a good friend and such a huge talent.

SCREAM: Thanks so much for speaking with us Chris.

CS: Thank you so much guys.

We’d like to thank Chris for speaking to us about the film which is released today and we’ll leave you with a trailer: 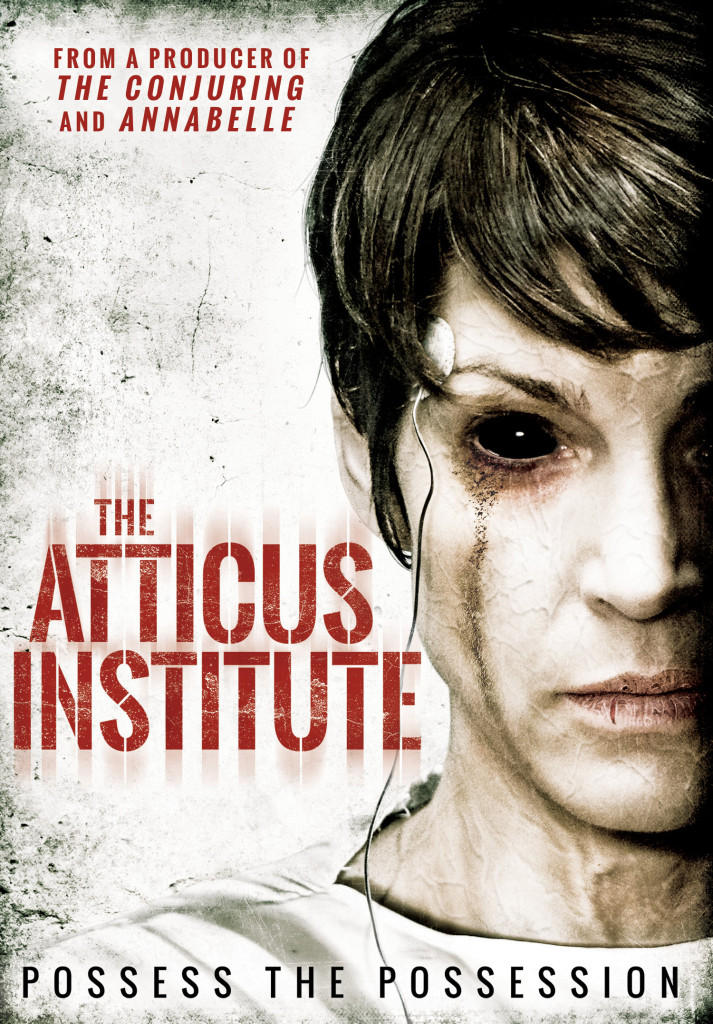