Some horror films are just as sweet as they are scary. That’s certainly the case with Attachment, the feature debut of Danish writer and director Gabriel Bier Gislason (read our review here).

Attachment stars Josephine Park as Maya, a down-on-her-luck Danish actress who falls for Jewish academic Leah (Ellie Kendrick). After Leah suffers an injury, the pair head back to Leah’s home in London, which she shares with her mother, Chana (Sofie Gråbøl). But something’s a little off in the house—and with Leah for that matter. Is there demonic activity afoot, or is Chana just overprotective?

Following Attachment’s screening at Fantastic Fest 2022, we caught up with Gislason to discuss his horror roots and the queer romance at the heart of the film.

SCREAM: What’s your relationship with the horror genre?

GABRIEL BIER GISLASON: I’ve always loved horror films. I grew up in film: both my parents were working in the business, and on top of that, my grandmother, who was a public school teacher, was obsessed with films. So I grew up watching movies all the time and was exposed to so many films.

But horror was something I got to discover on my own because, aside from classics like The Shining, it wasn’t really on their radar. I fanboyed Sam Raimi as a director. I saved up my allowance so that I could go down to the one store in Copenhagen that sold American DVDs and buy the limited-edition Evil Dead trilogy with a latex Necronomicon.

Attachment is the first horror film I’ve made. All my shorts up until then were usually comedies or tragic comedies. But I’ve always been interested by horror. I hate the term “elevated horror,” but when The Babadook and It Follows and that wave of horror films happened, that was right around the time I started film school at NYU. And being in this place where you’re constantly thinking about how films are made and the basic language of cinema, that made me fully appreciate that horror is such a pure cinematic genre in that—more so than any other genre—it relies on the basic elements of filmmaking.

I know you’ve lived in London in the past. How did you approach capturing the distinct feel of the Jewish community in the city?

The honest answer is, by taking a lot of liberties. As a Jew, it was important to me that this film not be about being faithful to or authentic about Judaism. It was more about hitting a certain sensibility or tone or mood that felt Jewish and playing on certain Jewish tropes that I love and wanted to mess around with.

It’s a fantastical film, so I wasn’t really interested in the realism of it. I took the parts that I thought would work for the film, left the parts that didn’t, and made up the stuff in between.

The relationship between Maya and Leah is incredibly sweet. How much time did you spend working with the actresses beforehand to make the relationship feel so comfortable and grounded?

Josephine and I have known each other since we were teens. I wrote the film for her—the film exists because Josephine exists. Ellie we cast because she was just so immediately right for the part. I had my first Zoom with her and within two minutes I was like, “Yeah, this is the person.” But I wanted to do a read with her and Josephine to make sure there was chemistry. They read a scene together, and then I cruelly made them improv a scene together, and it was super awkward over Zoom—yet really, really funny. The chemistry was there. The moment we got off Zoom, Josephine was like, “Okay, well it has to be her.”

Because we couldn’t be in person, we did these long Zoom chats where we went through the script and they talked. As queer women, it was really nice to hear them talk about what felt true to the characters and how they could play it. It was funny—I said, “I’ve been getting notes from people that you guys fall in love pretty quickly and decide to move in together right away. Is that weird?” And they immediately burst into laughter and said, “No.”

We have a term for that in the queer community. It’s called “U-Hauling.”

Yeah. And once Ellie could finally come to Copenhagen, the two of them spent a bunch of time getting to know each other and reading the script together. We spent every weekend going over scenes and I would tweak scenes depending on how they sounded when reading them.

There aren’t many intimate scenes in the film, but for those scenes, we would close down the set so that they could block it in a way that felt intimate and natural. Then the DP, the AD, and I would come in and look at their blocking, maybe tweak for the camera or the lighting. But it was always about making sure they had a great sense of ownership over the characters and relationship. We kept finding ways of making it feel real for them, so they could feel like they were in love.

Attachment is not about queerness, but Maya’s queerness does contribute to her sense of being an outsider and experiencing tension with her partner’s family. Can you talk a little about that element of the script?

Josephine and I got incredibly drunk about four years ago and she told me these absolutely bananas stories about an ex-girlfriend of hers and how they were between apartments so moved in with the ex’s mother for a bit, and it was just a fucking nightmare. I can’t tell any specifics because I promised Josephine I wouldn’t, but it was so funny and over the top that, in my drunken reverie, I told her, “I’m gonna write you this movie and it’s gonna be great.”

I woke up the next day thinking, “That’s actually a great idea, I should write this movie.” But I didn’t really know what it was going to be about. That’s not a film; it’s just the setup.

And then the idea of making an irreverent Jewish horror movie was banging around in my head. The trope of the Jewish mother is her being really overbearing, really overprotective, and everything is always a matter of life and death. I thought, wouldn’t it be really funny if you made a movie where it actually is? In ways you might not understand, the stakes are actually that high.

When that idea came into my mind, the idea of these three women in this house together seemed like such a weird tension you could play with. And then, because I wanted to draw on this particular Jewish mythology, it made sense that it had to be in some kind of orthodox community, because that’s historically where those mythologies live. It’s part of a Yiddish culture.

When all these elements were lined up, it became a matter of, how can I fit these things together without it having to be about a certain type of queer experience? With me not identifying as queer, I don’t want to try and make a film about that because I haven’t felt that on my body. At the same time, you can’t have this relationship in a quite religious community and not touch on it. But I’m not making Disobediance, you know?

Absolutely. So, what’s next for you? 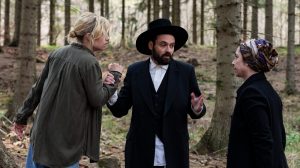 I’ve just gotten some financing from the Danish Film Institute for a new project that’s set in Iceland and inspired by an Icelandic ghost story. I’m half-Icelandic, the non-Jewish side of me. I’m writing it for Sofie who played Chana. She’s amazing, I love working with her. It has spooky elements to it, but it’s more like a supernatural tragic comedy about grief.

Attachment was acquired by Shudder earlier this year. We’ll keep our eyes peeled for a release date to share with you.