You can’t always judge a book by its cover, but with this one you can, and that’s a very good thing. Worms is a pretty short novella that you can rip through in a sitting or two. This is a good old creature feature that I don’t come across too often anymore. It immediately brought to mind two of my favourite gross-out, nature run amok books: Slugs by Shaun Hutson and The Rats by James Herbert. Check them out if you’ve never read them.

It starts in a typical suburban street with a down on his luck unemployed husband, Tony.  He’s reduced to spending his days catering to his wife’s child-replacement, annoying, yappy dog, Stevie, who she probably loves more than him. Then, throughout the neighbourhood, comes the black ooze bubbling up from underground.  When a thick, three foot long, vicious worm bristling with teeth explodes out of his toilet, it becomes clear that the dog is the least of his worries. 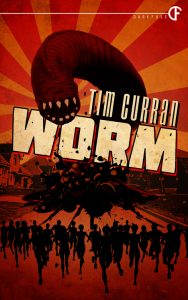 The story skips around to the various neighbours as they deal with the worms that come up through the plumbing and into their homes. This takes us into joyous set piece after set piece, as residents square off against the worms. No prizes for guessing who usually comes out on top. The kills are brutal and some of them are downright disturbing. The intensity picks up as the story progresses and moves towards a satisfying stand off and an exciting conclusion.

What’s not to enjoy about this premise? It’s not going to scare you to the core, but it’s fantastic fun and hugely entertaining. Well, on second thought, it might scare you enough to keep you from sitting on the toilet too long. It may also make you queasy. The descriptions of the worms are vivid and squirm-worthy – he really brings them to life. The gore is fantastic. I can guarantee you won’t be disappointed. I’m a big gore-hound so I enjoyed every minute of it. Body parts get broken, chewed up, eaten and spat out – delicious. As you might be able to tell, I strongly recommend this book.