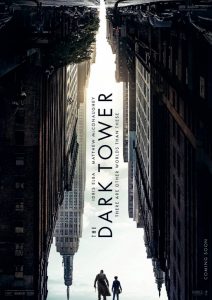 It definitely looks as though someone has been watching a bit too much Inception with the new poster for The Dark Tower. The world is shifted upside down for Idris Elba’s Roland Deschain and Tom Taylor’s Jake Chambers. As the Man in Black, Matthew McConaughey stalks above, while those below head to the Dark Tower.

According to Stephen King, who’s seen the finished film, The Dark Tower is “terrific” and will be released on 28th July 2017. Shall we start getting our hopes up?