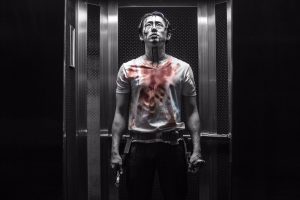 The film stars Steven Yeun who, outside of his signature role as Glenn Rhee in The Walking Dead, has remained relatively absent from screens both big and small. He plays attorney Derek Cho, who is framed by a co-worker and wrongfully fired on the same day that an airborne virus breaks out in his corporate law office. Trapped in the quarantined building, he must fight not only for his job but for his life. Ash Vs. Evil Dead’s Samara Weaving co-stars, alongside Steven Brand (Hellraiser: Revelations) and Caroline Chikezie, who also appeared in Lynch’s Everly. 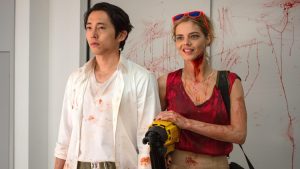 “I’m thrilled that Octane is going to spread the Mayhem at Cannes this year,” Lynch said last week. “We can’t wait to unleash the film globally and excited to share what festival audiences have been enjoying so far: a good old-fashioned, R-rated rollercoaster ride with balls and heart… you know, for kids.”

Mayhem was shot last year in Belgrade, Serbia, and had its world premiere at this year’s SXSW Festival.