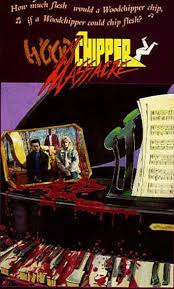 A father leaves his three children in the care of a relative while he goes away on business. When the youngest receives a hunting knife in the mail, she attempts to take it from him. As the two of them struggle, she’s accidentally stabbed and dies. The children go into a panic, and decide to dispose of her body in a woodchipper the family has rented for the weekend.

The advent of home video was one of the largest sensations to occur during the 1980’s. Almost overnight, popular films were made easily accessible, and the VHS camcorder made it possible for amateur movies to be made on a shoestring budget. It also led to the rise of the SOV (shot on video) horror film. Relatively easy to make and distribute, several titles flooded video stores throughout the entire decade. Such is the case with Woodchipper Massacre, a low budget horror comedy, and the sophomore effort of writer/actor/director Jon McBride. Since its release in 1988, it’s gone on to be popular among fans that crave Z-grade schlocky fun.

Judging from the title, one might expect an unrelenting splatter fest. Images of severed limbs stuffed into machinery come to mind, or something in the vein of Dead Alive or Two Thousand Maniacs. However, nothing could be further from those preconceptions. Woodchipper Massacre is the perfect example of a title being somewhat misleading. Although there’s woodchipper in the movie, it barely comes into play. Enormous amounts of blood, dismemberment, unrelenting carnage are all absent, so bloodthirsty gore hounds will most likely be disappointed. Whatever it lacks in that department is made up for with its comedic aspects—both intentional and otherwise. Even the films’ opening has a slow text crawl (A la The Texas Chainsaw Massacre) that seems to border on parody. 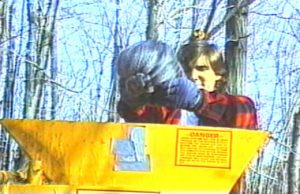 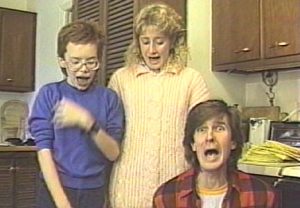 The story focuses on three siblings who have been entrusted to the care of their abusive aunt for a weekend. With the events of the movie restricted to their home and backyard, and the trio dealing with their annoying family member, the ‘massacre’ is more or less nonexistent. (The death toll doesn’t even reach above two.) The most memorable facet to be found is the acting, or lack there of. The cast, which includes only one actor with previous experience, attempt to take their roles as seriously as possible. Watching them try to navigate these waters isn’t the easiest of tasks, especially when it’s obvious they’re reading off of cue cards more than once. McBride even casts himself as the eldest sibling, and gives a prominent role to one of his own family members. Limitations from acting ability aside, it suffers from one of the pitfalls that other SOV flicks such as Video Violence and Violent Shit have: unnecessary padding. While the plot and overall story aren’t exactly known for their complexity, things are drawn out with pointless scenes of driving and a cleaning montage that stretch it out to a 90 minute running time.

Surprisingly enough, the movie finds a way to work within its own limitations. It knows exactly what it is, and doesn’t attempt to be anything extravagant. It’s funny, entertaining, and worth a viewing. A product of the bygone VHS craze, it’s proof that almost anyone can make a movie, and have success in the most unlikely of ways.