Women are Evil in the Trailer for Lilin’s Brood 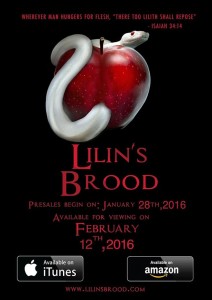 A trailer and clip have been released for Lilin’s Brood, which tells the scary story of a news team trying to investigate a series of missing person cases. All the missing people are men actually, and the team are lead to a group of women; Lilin’s Brood, who are hiding something seriously sinister.

Synopsis:
A “New Media” news coverage team (W.H.I.S.T.L.E.) is stranded near a beleaguered brothel in the middle of nowhere; recovered footage will reveal what happens when they encounter a group of women with a terrifying secret.

The trailer shows the men encounter these mysterious women who use their freakish strength and the art of seduction to lure their victims in to their devilish world. There’s actually some surprisingly jumpy and spooky moments in the trailer, which suggests that the found footage aesthetic has a little more to offer yet.

You can also watch a clip, too, which shows the group in an RV gearing up to start their investigation. However, they’re interrupted by a large crash when their RV runs into a mysterious creature; it’s probably a deer, right?

You can watch Lilin’s Brood on VOD when it is released on iTunes and Amazon on 12th February 2016.