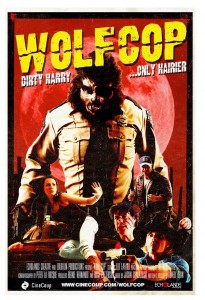 Synopsis:
It’s not unusual for alcoholic cop Lou Garou to black out and wake up in unfamiliar surroundings, but lately things have taken a strange turn. Crime scenes seem oddly familiar. Lou’s senses are heightened, and when the full moon is out, he’s a rage-fueled werewolf. WOLFCOP is one cop’s quest to become a better man… One transformation at a time.

WolfCop is certainly a sharp and authentic riff on many a werewolf movie we’ve seen before. Although the pay off isn’t quite as rewarding as the films it howls homage to, director Lowell Dean’s latest horror-comedy certainly sets the foundations for a promising new genre franchise. The film has two wise filmmaking decisions to thank for its success. The first of these being the decision to go for a humour-heavy film that never ever takes itself seriously in the slightest. The jokes are effective for the most part with Lou Garou’s sidekick, Willie (Jonathan Cherry) providing most of the inspired humour as he serves a similar purpose to say Jerry Levine’s Stiles character in Teen Wolf. It was also a surprise for such a satirical movie to provide a late-game twist that I had by no means bargained for.

The other sensible decision was to splash out on Emerson Ziffle’s ever so gruesome special effects. The all-important element of any werewolf film is always going to be an effective transformation scene and the first time Lou sheds his skin will make a grown man cry. Suffice it to say that WolfCop does for urinals what Jaws did for taking late night dips in the sea. Kudos also to the casting department, particularly for choosing Leo Fafard as Lou Garou. Dean always intended to have one and the same actor playing Lou Garou and WolfCop and Fafard works a treat, slipping seamlessly from bumbling carouser cop to his unabashed hairy second self.

Despite the film’s top-notch effects and generous amounts of off-the-wall humour my only gripe is that WolfCop didn’t go as ambitious as it probably could or should have. Having said that, this was most likely due to budget shortcomings and Dean may well have had to scrap a few over-ambitious ideas before reaching the finish line. Whatever the case, armed with a bigger budget the already green lit sequel should hit so many more right notes.

With WolfCop currently reaching the midnight masses on the international festival circuit (and even more when it hits DVD) Lowell Dean’s love letter to the best litter of lyncanthrope films to date is certainly setting him in good stead. Whilst the film isn’t altogether perfect, it still rouses excitement to see what crazy new plot Dean comes up with next time.