The Wolf Creek series is pretty fantastic. If you haven’t caught up with the first season, then you really should. Those who have seen the first season and loved it will be glad to know that John Jarratt’s brilliantly psychotic Mick Taylor will be returning to our screens once again. Season 2 of Wolf Creek will air on Australia’s Stan network later in 2017.

Wolf Creek series 1 is out now on DVD and Blu-ray in the UK and is out in the USA from 21st March, so that leaves you with plenty of time to delve into Mick’s murderous mania before season 2 is unleashed. 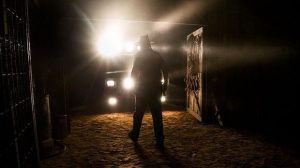 Bloody Disgusting nabbed an excellent tease for what’s to come in the next season from show creator Greg McLean:
“It will again be an intense and scary horror/thriller but this time out it’s an entirely new set of characters and storyline. At the centre of it all will be the evil Mick Taylor – who takes his hobby of hunting and killing to shocking and chilling new levels as we delve deeper into his twisted psyche.”

Great news. Look out for Greg McLean’s next directorial endeavour The Belko Experiment, which is set for release in the USA on 17th March 2017.