Wolf Creek Miniseries Heading to US in October 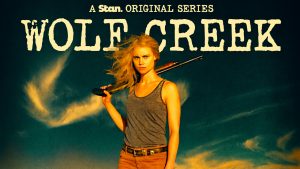 The Wolf Creek TV miniseries, which premiered on Australian streaming service STAN back in May, is headed to the US in October.

Greg McLean, who directed the original 2005 film and its 2013 sequel, executive produced the series, and has described it as “holy fucking shit scary.”

The all-new story begins with Outback psychopath Mick Taylor massacring an American family holidaying in Northern Australia. The sole survivor is Eve Thorogood, who vows revenge on the sadistic killer. We follow Eve’s journey over the series’ six episodes, as she overcomes fear and grief to become strong enough to face Taylor.

Wolf Creek will premiere on Pop on Friday, October 14 at 10:00 PM, ET/PT, in conjunction with Lionsgate Television and Zodiak Rights. Hopefully an air date for the UK will be announced soon.