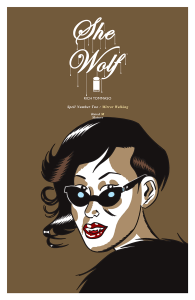 In Issue #2 of She Wolf, Gabrielle – convinced she’s been attacked by a werewolf – becomes less and less able to control her imminent transformation, seeing herself becoming increasingly lupine when she looks in the mirror. She meets Nikki, a self-proclaimed vampire, who begins to show her how to suppress her fantasises, taking her on a vision quest that involves Mayan death cults, sacrificial goats, and a rather Dantean depiction of Hell.

If She Wolf #2 sounds deep, gothic and interesting, believe me, it isn’t. In fact, despite its mature rating, the comic would be far better suited to a young adult market. This is Angela Carter for twelve-year-olds, offering nothing but a shallow, predictable look at the supernatural. Here, giant wolves and vampire bats fight Godzilla-style in a shopping mall, all the while, discussing half-formed ideas about letting go of one’s Catholic guilt. There’s a good story hidden somewhere in She Wolf, but Tomasso always opts for the easy way out. Basically, there’s nothing in Issue #2 that hasn’t been done better elsewhere.

Although I criticised the first issue for not having an awful lot to say, I remained hopeful that Tommaso’s intentions would become clear as the series went on. But with the release of Issue #2, I think it’s safe to assume that Tommaso is more interested in style than substance, with characters posing and posturing instead of driving the narrative forward. We learn almost nothing about Gabrielle that we didn’t know by the end of the last issue, and in a story so focused on her many fantasies and delusions, it’s hard not to remain indifferent to such a flat, dimensionless character. The same could be said for Nikki, whose explanations for becoming a vampire seem unconvincing from the very start. 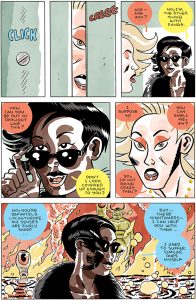 ut Tommaso’s art is still the most divisive thing about She Wolf, and a reader’s enjoyment of the story will undoubtedly depend on whether or not they like the animated style of the illustrations. There’s certainly a rushed, breathless quality to Tommaso’s art, giving the comic a constant sense of movement, even when the dialogue remains facile and uninteresting. Gabrielle’s dream sequences are still the book’s main redeeming feature, with some nice imagery used throughout – even if there’s never a great deal behind them. The design of the Mayan sequence, for example, has some fun, exotic imagery, though perhaps explaining how and why it ties in to the story would make these pages more effective.

It’s not that She Wolf #2 is a bad comic, just an extremely disappointing one. In recent years, Image have released some of the most innovative creator-owned comics on the market, but She Wolf pales in comparison to these titles. For readers looking for a light and forgettable piece of escapism, there are far worse things to read than this, but all in all, She Wolf is a limp, bloodless creature – one that probably deserves to be put down.