Witness The Beginning in the Poster for Leatherface

The idea of a prequel to Tobe Hooper’s classic Texas Chainsaw Massacre will sound like a scary prospect to many of you, and probably not in the way the film-makers hope. However, if you take a look at this poster for the upcoming Leatherface, it may begin to sway your opinion. Admittedly, it’s just a tiny droplet in the massive bucket which will be the film, but it’s definitely a step in the right direction. It’s simple, but quietly menacing; a child holding a chainsaw is immediately unsettling.

Additionally, we have horror directing extraordinaires Alexandre Bustillo and Julien Maury in the director’s chairs. Inside is one of the most fantastic horror films ever made and if you haven’t seen it, I urge you to do so immediately. It’s an utterly visceral, relentlessly brutal nightmare and a must-watch for fans of terrifying, yet beautifully directed horror. I could go on and on about my love for it, but we’ll save that for another day. 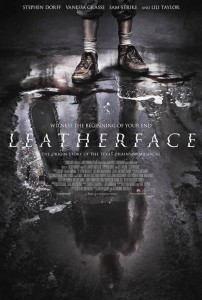 Synopsis:
Prequel about teenage Leatherface who escapes from a mental hospital with three other inmates, kidnaps a young nurse and takes her on a road trip from hell. Along the way, they are pursued by an equally deranged lawman out for revenge.

Take a look at the poster for Leatherface (right) and be sure to catch the film when it is released in 2016.