If you get a feeling of déjà vu watching the opening scenes of Within, it’s because you have indeed seen it before. Countless times. The actors may be different and the overall look glossier, but this tale begins as so many have before it, with a couple and their teenage kid moving into a new home, only for strange occurrences to begin plaguing their nights. In this case the bland but pretty family consists of John (Michael Vartan), his new wife Melanie (Nadine Velazquez) and John’s daughter Hannah (Erin Moriarty). No sooner have they begun covering their walls with tacky, middle class crap than Hannah begins to hear strange noises, and becomes convinced that something is not right in their new house. It soon comes out that a family were butchered there, and the previous owners simply upped and left. Hannah delves into the house’s past, and finds out that the walls hold a secret that none of them expected.

The first act of Within throws every conceivable cliché into the mix – the creepy neighbour, pictures falling from walls, close-ups of setting the house alarm – and features entirely throwaway dialogue masquerading as characterisation. We’ve seen these characters before, we’ve heard this dialogue before and, watching Within, you start to think ‘what’s the point?’ And the thing is, when somewhere around the halfway mark the script does actually deviate from the story it initially purports to be, it’s barely a surprise, chiefly because the first act sticks so rigidly to established formulae that you’re awaiting – and fully expecting – the moment when the film introduces its own idea.

While Within may be as generic as they come however, it’s engaging enough, rolling along quite easily to what is actually a rather nicely executed third act. And even its overly familiar first half contains some not ineffective scare scenes of Hannah creeping around the house at night, handled competently by director Phil Claydon in his first feature since almost killing his career before it had begun with 2009’s Lesbian Vampire Killers. It all feels very safe (which is not what horror needs to be), with the threat from greasy, sleazy neighbour Ray the closest we get to any kind of unpredictability or excess.

While they are not given much exciting to work with, Velazquez (best known as Catalina in My Name is Earl and deserving of better parts than she is given here) and rising star Moriarty (Captain Fantastic, Blood Father) do what they can to elevate the material, and it’s always kinda nice to see Vartan, even doing the dull everyman thing that he seems unable to escape these days. And then there’s Poltergeist’s JoBeth Williams on hand to lend a touch of class, doing what she can in the ‘older neighbour giving the teenager the lowdown on the house’s history’ role. 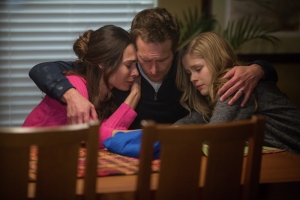 An entertaining enough way to spend an hour and a half, Within manages to make something just about worthwhile out of a lazy, generic script and underwritten characters. We seem to be in a new golden age of intelligent and intellectually challenging horror, and most of us simply don’t have time in our viewing schedules for this kind of thing. Proof that director Claydon is a safe pair of hands if little more though, the film is seldom boring, and if you’re after an easy horror watch and some jolting but safe scares, you could certainly do a lot worse.