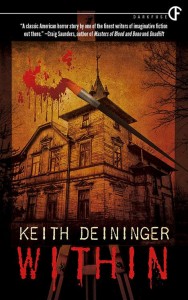 Within is Keith Deininger’s take on the fabled town of deceit and deception nurturing the evil within its walls. Existing almost through a tear in the fabric of reality, a place where nightmares are born and clutch at the borders of reality.

Mesa Rapids on the Colorado River, houses many of the art fraternity, wealth resides in abundance on the hill plateau, so it was with great surprise that the unlimited resources of Klimt bought the dilapidated Upshaw mansion in the valley.

The two communities of wealth and the other end of the spectrum existed but rarely mixed, the wealthy stayed on the hill and the working community of the valley kept to their own lives.
Klimt changed all that, wild parties followed and the people seemed to change, become more carefree, excitable, they suffered from nightmares and life slowly slipped, careening toward deviance.

‘If Mesa Rapids had been a person, it would have been an easy diagnosis to have her committed, and, in many ways, she was. She’d slipped from the minds of the outside world.’

Struggling artist Colin moves to Mess Rapids and finally amidst the drugs and alcohol, luck falls his way. He is offered a job to paint, to explore his artistic license with no restraint. The Upshaw Manor will be his canvas and blood red his colour, kindred of his darkest nightmares. Pretty soon Colin is teetering on the brink of sanity, existing in a daze from lack of sleep, where time ceases to flow as it should and his purpose at the mansion takes a sinister turn. He never leaves, he only has one thing to do and that is to finish his mural. A young boy who suffers from visions may be his only saviour and the few friends he possesses.

Soon enough the town trips as if possessed with no balance, aimless with but one notion and amidst unprecedented murder and nightmare. Klimt’s true motives come to light, more sinister than any imagination could have foretold, the town of Mesa Rapids comes with an evil history that ever clutches for rebirth. Another superb story from Keith Deininger, his writing seems to come from somewhere between dream and nightmare, between solidity and hallucination. That’s what it feels like, anyway and I really liked it.