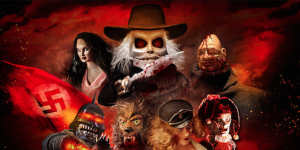 The first Puppet Master film not made by Full Moon, The Littlest Reich is due to begin filming on March 27th, and will reportedly expand the series’ mythology, kicking off a whole new universe with multiple plot strands. It will be interesting to see how the property fares in more, shall we say, reputable hands, as the attached names are rather exciting indeed. Sonny Laguna and Tommy Wiklund – who directed the superb, Evil Dead-esque Wither – are down to direct, with a script penned by Bone Tomahawk writer/director S. Craig Zahler.

The following synopsis recently emerged:
‘The Littlest Reich’ follows a recently divorced young man who discovers a mint condition Blade doll in his deceased brother’s closet and plans to sell the toy at a convention in Oregon celebrating the 30th anniversary of the infamous Toulon Murders. All hell breaks loose at the Postville Lodge during the auction when a strange force animates all of the various puppets throughout the convention as they go on a bloody killing spree.

“Puppet Master was hands down my favorite, and I had the movie poster on my wall and a giant standee in my bedroom,” Caliber Media’s Jack Heller said recently. “We couldn’t be more excited to take the series in a new direction while embracing all the practical effects and terrifying insanity that fans of The Puppet Master films love.”

We will most definitely be bringing you more on this as the year progresses.