Wishmaster’s Andrew Divoff Not Done With The Djinn 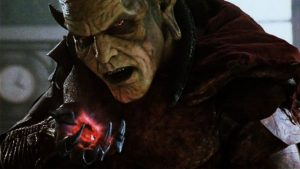 With the Wishmaster series having recently made it to Blu-ray through Lionsgate’s Vestron Video Collector’s Series, Andrew Divoff has been chatting to various outlets about the films and his role as the Djinn. Talking to Geekadelphia recently, Divoff – who played the wish granting demon in the first two films – revealed a wish of his own; to return to the franchise if ever a fifth film emerges.

“Well, you know what, if I had one [wish] I might as well go ahead and say it. Wishmaster 5. I will answer the lingering question, I would love to do it again,” he told the site. “But whether it is me or not I think the franchise has a lot of life left in it.”

Bringing a gleefully malevolent energy to the role of the Djinn in the original 1997 film and an enjoyable if lighter approach in the 1999 sequel, Divoff departed the series to be replaced by John Novak for the third and fourth instalments. Seeing him return to the role would be a joy, and surely bring lapsed fans back to the franchise. Here’s hoping the right people are listening.

During the Geekadelphia interview, Divoff also talked about his rejected script for the series’ third entry, entitled Wishmaster: The Third Millennium.

“I was a little too well, how should I say, overshooting the mark with what could be expected from special effects at some of the things that were included in my script; like gargoyles on buildings coming to life and coming down into the street and that sort of thing,” Divoff admitted. “That would have been, as we had discussed, the budget for that one outweighed the rest of the films. It was called Wishmaster: The Third Millennium. It was written right around 1999 and 2000 and it was basically, you know in anticipation of Y2K and all of that. You’ll remember that was a bit of a panic in the day. There was an American warship in Asia and it is hit by a missile, and all hell breaks loose. Incidentally, there is a meeting going on at the UN and monsters come to life right there and go through the crowd and start ripping it up.”

Elsewhere, Divoff will soon be seen in Miles Doleac’s supernatural chiller Demons, and alongside A Nightmare on Elm Street’s Amanda Wyss in The Hatred.