Netflix may well have another winner on their hands with their newest drama series; a mystery/supernatural affair entitled Stranger Things. The show, which stars Winona Ryder as a mother whose son suddenly disappears, has been described as a “love letter to ‘80s supernatural classics.”

Stranger Things takes place in 1983, in the sleepy suburb of Hawkins, Indiana. It’s a town where nothing much happens, until the day that young Will goes missing. The police are joined in their search for the boy by friends and family, all of whom become increasingly entangled in a bizarre mystery involving, well, strange things. 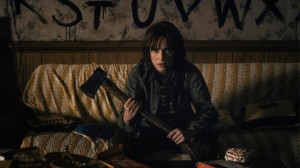 Ryder plays Joyce, with Noah Schnapp (the voice of Charlie Brown in The Peanuts Movie) as her son, Will. The cast also features David Harbour (A Walk Among the Tombstones), Matthew Modine (The Dark Knight Rises) and Let Me In’s Cara Buono. The show was created by Matt and Ross Duffer, the brothers responsible for last year’s thriller Hidden.

This unsettling trailer has gotten me all kinds of intrigued. Mysteries will be unravelled when all eight initial episodes of Stranger Things launch on Netflix on July 15th.