If the 1970s are to be remembered for anything, let it be for starting the Satanic Panic. Movies like The Blood on Satan’s Claw, the Devils Rain, and To the Devil a Daughter turned the tide of the hippie dippy 60s to the religious powder keg of Satanism that lasted into the mid-1980s. Out was peace and love and in was Anton Lavey and Black Sabbath and of course, the oft loved, Heavy Metal magazine. Thanks to this unique era of horror exploitation, Image Comics and writer Steve Niles have released a cult-inspired comic titled Winnebago Graveyard; one that dips heavily into the imagery of its hellish movie predecessors, complete with a road-trip-gone-wrong and a town so small it’s not even on a map. While a fun introduction to the world of Satanic horror, Winnebago Graveyard suffers from odd pacing and wonky art that ultimately ends up distracting from the overall work.

There aren’t a ‘whole-town-with-a-secret’ horror on big screen these days, so it’s fun to see this genre staple see some sort of revival. Niles did a solid job of capturing the isolation of the work by thoughtfully setting it in the American Southwest, a location choice once popularized by similar isolation-type horror such as Texas Chainsaw Massacre and The Hills Have Eyes. He focuses the comic on a family simply looking to reconnect with each other and plops them dead in the middle of a desert where the only interesting thing is a lame attempt at a carnival. While the reader knows that there’s more to the place than meets the eye thanks to a devilish introduction sequence, the family of three only sees bad rides and worse food. It’s not until their Winnebago is stolen, do they realise that something sinister is afoot and they are all alone in a frightening land.

To add to the overall vibe, the script is relatively silent, only choosing to use dialogue as a means of distinguishing the relationship between the three newcomers. Everyone else is either mute or has a few words, revealing that the residents aren’t exactly fond of the new arrivals and refuse to even help them. There’s a lot of classic camera horror elements pulled from exploratory film years of the 70s including attempts at the long camera take of the surrounding desert and the curved angle shots as the family makes their way through the bizarre carnival. As stated, he does a great homage to the Satanic Exploitation genre, even going so far to directly talk about his love of old school schlock in a short essay at the end of the issue. 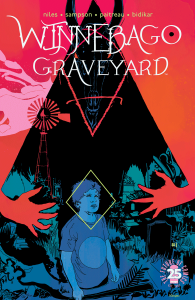 Unfortunately, there are a few hiccups that slow the whole comic down and more than once bring the reader out of the immersion. The most obvious is the art. It’s not so much the landscapes or layout, those are done with a wonderful sense of precision, but the actual human movement and anatomy. The faces and body movement seem more posed than fluid, as if the artist used picture of references for every single shot and the inking throws off the placement of the facial features. The facial expressions themselves seem especially strained, as if everyone is constantly constipated or confused, and the figures just don’t mesh well with their surroundings. The colouring does stave off some of it, but for this reviewer, the inconsistencies were simply too much. Story wise, the issue seemed to end randomly. It stops on a cliffhanger, as expected, but it felt like the comic finished on what should’ve been build up point, not an ending point. It’s an odd decision that jolts the reader out of the comic before they’re ready to. This is a work that would read better as a graphic novel and with only a four-issue run, it might be wort to wait for one.