Synopsis:
The troubled Dr Eric Price (Jason Clarke) is hired by lawyers of the Winchester Trading Arms comapny to assess the mindset of its heiress Sarah Winchester (Helen Mirren). Sarah believes she is tormented by ghosts of the people killed by the weapons her company created. While visiting the widow in Winchester House, a gargantuan seven storey structure under constant construction, Dr Price starts to wonder if Sarah’s spectres are more than just imaginary.

Inspired by actual events: this 1906, San Jose set story about one of the most haunted homes in North America has a fascinating premise but has been monstrously botched by unimaginative plotting, indolent characters/acting and editing that reduces the latter acts to a cluttered melange of jump scares, clichés and crude CGI.

The Spierig’s conjure an apt rustic ambience aroused by 70s/80s haunted house/ possession horrors like Death at Love House, Audrey Rose and The Legend of Hell House. This is evident in its retro opening credit sequence, character factors and a segment where Sarah is seemingly inhabited by the spirit of an architect and angrily scrawling the wrong kind of plot designs which recalls the classic séance scene from Peter Medak’s The Changeling.

The protagonist Dr Price has the facets to be a fascinating anti-hero with a crippling defect to do battle with along with the external forces. However, his laudanum addiction is fired by grief from a personal loss that sadly does little to help the viewers empathise with him due to Clarke’s perfunctory performance, but this aids his character’s connection to the widow Sarah Winchester, who recently lost her husband and child.

Despite his personal demons Price is plasticised by Jason Clarke with an arc that’s wilting into dormancy while buried under the hotchpotch of nonsensical action and bleary effects which befuddle, discombobulate and fail to astound. Meanwhile, Mirren phones in the whimpering woman in black thing with reticent pizzazz but could just be doing her best with the dud dialogue. 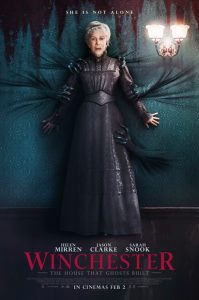 Supporting characters come in the form of the heiress’ niece played by Sarah Snook and her troubled son Henry who spends most of the duration white-eyed and snarling while possessed with a bag over his head or trying to take out his great aunt with a shotgun. Dr Price misinterprets supernatural encounters as hallucinations brought on by the drug addiction and goes after the ghosts with heavy artillery (as you do); cue the story’s total collapse into defunct creaky floorboard ghost train horror and clunky stunts that cripple the characters, production, plot (and lack there of).

Despite the directors’ screenplay rewrites, Winchester’s screenplay (the most vital mechanism) is it’s overriding weakness and corrupts every other production cog. The set up is sufficient but its second act judders before crumbling into a disarray of classic horror components that, despite some of which being individually crafted with care, have not been melded with the same kind of love, ardent ingenuity and consideration that Winchester House had.