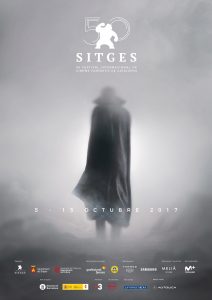 With this year being the 50th anniversary of the Sitges – International Fantastic Film Festival of Catalonia (5 – 15 October) big things were sure to be in store, and if today’s press conference is anything to go by, it’s going to blow minds.

Amongst the highlights, 2017 is set to be the year of the vampire with Dracula serving as the festival’s leitmotiv and virtual reality will once again play another major role with the presence of the Samsung Sitges Cocoon.

In terms of guests, whilst all manner of leading figures are yet to be revealed over the coming months, the first three confirmations are all exemplary filmmakers in the history of genre cinema: Guillermo del Toro (the festival’s Godfather for the 50th anniversary), William Friedkin and Johnnie To.

From the Press Release:
Sitges – International Fantastic Film Festival of Catalonia is celebrating its 50 anniversary. Sporting a new image, whilst preserving the classic gorilla emblem, this new logo is an adaptation of the historic Sitges brand and a reaffirmation of its commitment to genre cinema.

This year’s poster features the Festival’s leitmotiv –Dracula– the fantastic genre’s myth par excellence, coinciding with the 25th anniversary of the definitive film Bram Stoker’s Dracula, directed by Francis Ford Coppola. The poster, created once again this year by the China agency, rediscovers the mysterious and otherworldly essence of the vampire, dissociating it from both recent banalizations and overexploited clichés. In the words of Rafa Antón, member of the creative team at China:
“We wanted to pay tribute to Stoker’s work through an exercise that goes way beyond clichés, banking on the sole presence of a mysterious and evocative figure emerging from the fog. A fog that already appears in the source text and that is used as a visual metaphor of this ‘ocean of time’ Dracula crosses to reach his destination and his loved one”. The photograph, taken by Biel Capllonch, is inspired by the abstract atmosphere that’s characteristic of painters from the 19th century like Friedrich or Turner, whose work served as an aesthetic preface to the novel itself”. Completing the creative team that made the poster are Miguel Ángel Duo and Nico Ordozgoiti.

As an innovation this year, the Sitges 2017 poster features a new type of creativity in augmented reality format, at the hands of the Wöwster Company.

Further to the previous announcement that Guillermo del Toro would be attending this year’s event as the Godfather of the festival’s 50th anniversary, it has been recealed that a further two masters of horror and thrillers will be at Sitges 2017: William Friedkin (The Exorcist, The French Connection,Sorcerer) who will be receiving the Festival’s Grand Honorary Award; and Johnnie To – prime example of Asian film noir with movies like Drug War or Election and winner of the Time Machine Award at Sitges 2005, handed to him personally by Quentin Tarantino.

In its 50th year, a creative audiovisual piece together with an official book will be presented to commemorate the celebration, paying tribute to its founders and eminent figures related to the Festival’s beginnings. The lineup of events this year have been designed to reaffirm genre cinema’s status as a universal language and the outreach of the Sitges brand as a hallmark of all fields that make up fantastic film. The Festival’s fiftieth anniversary is one of Generalitat Catalonian autonomous government’s official events on the list of anniversaries in 2017. To this effect, on May 2nd, the Festival received the Creu de Sant Jordi (Saint Gorge’s Cross) presented by the Generalitat in recognition of its 50 years.

50th anniversary exhibitions
The Festival is bringing its history closer to the general public with the exhibition “50th Anniversary of the Sitges – International Fantastic Film Festival of Catalonia 1968-2017: Cinema is Fantastic,” first at the Catalonian Film Library and afterwards at the Miramar Building in Sitges. The show is curated by Diego López, Festival programmer and head organiser of the Brigadoon section, and is organized along with the Film Library. It will take visitors on a journey through the 50 years of the Festival via its posters, film highlights, guests and a myriad of images. It can be visited in Barcelona from June 22nd to September 17th, and will be in Sitges throughout the month of October.

The Reial Cercle Artístic de Barcelona (Royal Artistic Circle of Barcelona) – an institution the Festival recently signed a collaboration agreement with – will play host to an exhibition that can be seen from September 5-24 going by the name of “50th Anniversary of the Sitges – International Fantastic Film Festival of Catalonia 1968-2017: Fantastic Memoir” which will consist of documents from the Sitges Historical Archive, copies of the Festival Newspaper from 1979 to the present day, catalogues from each year, books and original poster paintings.

For both exhibitions, the Festival is grateful for the collaboration of Jordi Rosell i Milà, David Rosell, the Sitges Historical Archive and Maria Pilar Ráfales.

Film series
The Catalonian Film Library will also be offering a commemorative series of screenings including a selection of approximately fifty outstanding films from the Festival’s history, jointly programmed by the Film Library and the Festival. Blade Runner, The Evil Dead, The Exorcist, The Thing, Akira, Reservoir Dogs, Oldboy, REC, The Day of the Beast, Mulholland Drive or Martyrs are just a few of the movies fans will be able to enjoy on the big screen from June 22nd to September 30th.

Samsung Sitges Cocoon is the fruit of a new collaboration agreement between the technological multinational and the Festival. This agreement provides Sitges with the privilege of showcasing some of the most innovative products in this sector. Accordingly, virtual reality will be triplicating its presence at the Festival with the debut of an official in-competition section, something unprecedented on the European film festival scene.

28 September 1968
The first Sitges Film Festival, then called the International Fantastic and Horror Movie Week, took place at the Prado movie theater from 28 September to 4 October 1968. The opening film was Aelita (Yakov Protazanov, 1924), a Soviet science fiction classic that explained how the Communist revolution could be exported to the planet Mars. To commemorate this anniversary, the Prado will host a screening of the film on September 28th.