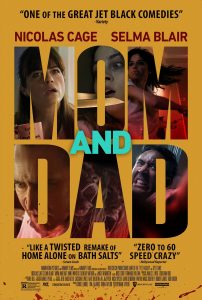 A wickedly violent poster has been unveiled for the black comedy Mom and Dad, which follows two siblings as they are forced to survive 24 hours with their crazed parents. For unknown reasons something has triggered a mass hysteria, turning mums and dads into violent monsters.

Selma Blair (Hellboy) and Nicolas Cage play the parents at the focus of this manic tale, while Anna Winters and Zackary Arthur play the survivor kids. It sounds like a whacky concept and from what we’ve seen it could be the perfect partner to 2016’s crazy-kid comedy-horror Cooties.

Crank director Brian Taylor writes and directs the flick which is set to be released in the USA and on VOD platforms on 19th January 2018. The film also stars genre veteran Lance Henriksen. Remind yourself of the barmy trailer below.