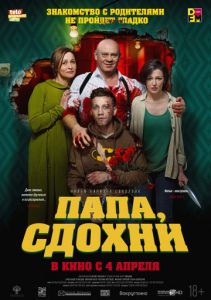 Synopsis:
A young man gets more than he bargained for when he goes to kill his girlfriend’s father, at her request.

With the exception of a few flashbacks to set up the stakes, the entire film takes place inside the small apartment of a corrupt detective, Andrey (Vitaliy Khaev). Our “hero” is Matvei (Aleksandr Kuznetsov), a somewhat dumb young man who shows up at Andrey’s door clutching a hammer, clearly intending to bash his brains in. His nerve fails him when he sees Andrey’s wife Tasha (Elena Shevchenko) is also home. But when Matvei drops the hammer, his would-be victim puts two and two together, triggering a brutal battle that pulls several people into its bloody orbit.

Nobody is exactly innocent in this film. People who are probably fundamentally good do bad things, whether it’s letting a murderer go free or being silently complicit in blackmail and lies. Matvei’s motives are somewhat justifiable—his girlfriend Olya (Evgeniya Kregzhde) asks him to do the deed after telling him, unconvincingly, that her father raped her as a child —but his willingness to go through with it hints that he’s not squeaky clean himself. We feel sorry for him as he realizes what a huge mistake he’s made (particularly in one toe-curlingly nasty scene involving a power drill), and as he drags and bleeds his way through the film, we start to root for him despite the odds.

Sokolov contrasts the film’s nihilistic undertones with bright pops of coloUr, zany editing choices, and bursts of music yanked straight from a spaghetti western. The filmmaking is occasionally more distracting than it needs to be, but for the most part, it’s a roaring good time. There are also some underlying criticisms of Russian society, but Sokolov seems more interested in entertaining viewers than lecturing them, and the grin you’ll leave with speaks for itself. 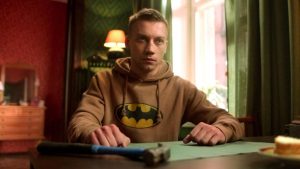 Of all the young filmmakers to be blatantly inspired by Tarantino, Solokov wields the influence far more successfully than most. It will be interesting to see what he produces later in his career when he settles more comfortably into his own unique style, because Why Don’t You Just Die! is one hell of a bold way to burst onto the scene.