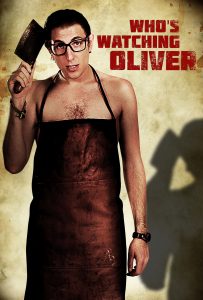 Many horror films focus on the toxic effects of an abusive family, examining how childhood trauma can negatively influence a person’s life. Who’s Watching Oliver – the first feature film from director Richie Moore – is the latest horror to explore these themes, questioning how someone with a learning disability can become reliant on an abusive parent.

Oliver (Russell Geoffrey Banks), a young man with Autism Spectrum Disorder, is on a trip to Thailand, spending his days taking photos in a nearby fairground. By night, Oliver picks up women in a local bar, and after plying them with drugs, proceeds to rape and kill them while his mother watches from her computer. We soon learn that his mother is the one forcing him to commit these acts, and that the two have a long history of violence and abuse. After meeting Sophia (Sara Malakul Lane), Oliver begins to question his relationship with his mother, trying to extricate himself from her control in order to lead a normal life.

Moore’s direction is masterful throughout the film, and he clearly does a great deal within his budgetary limitations. Through the use of handheld cameras and extreme close-ups, Moore is able to create a landscape that is both hot and oppressive, where the airiness of the fairground is Oliver’s only respite. Flies buzz around lazily; the characters all drip with sweat; and the whole film is imbued with a certain foetid quality, mirroring the inner turmoil of the central character. Similarly, the lighting – particularly in the interior shots – is suitably grim and moody, adding to the dark, shadowy aspect of the film as a whole.

Russell Geoffrey Banks is exceptional in the role of Oliver, veering wildly between awkward timidity and frenzied rage, often within the same scene. His character is on screen for a huge percentage of the runtime, and Banks is more than capable of carrying the energy, keeping the audience engaged through the quieter sequences of the film. Sara Malakul Lane also does a fantastic job with what is a fairly one-dimensional character, gracing Sophia with a warmth and depth that is often lacking in the script. Margaret Roche, however, is ridiculously over-the-top as Oliver’s mother. Each one of her lines is so excessive and exaggerated that they veer on comedy, making the tone of the film seem uneven as it progresses.

Although Who’s Watching Oliver has some interesting things to say about child abuse and trauma, the representation of women within the film is extremely questionable, throwing up some moral problems with which the film seems wholly unconcerned. The women here are either obliquely monstrous (Oliver’s mother), blank and vacuous (Sophia), or are punished for being promiscuous, swearing or working in the sex trade (Oliver’s victims). Of course, horror films have never been particularly kind to women, but the fact that we are clearly meant to sympathise with Oliver makes this somewhat problematic. Oliver tells his mother, “You’re the monster,” but can we really feel for someone who has raped and killed so many women?

The sexual violence, which is extremely graphic, often feels facile and gratuitous – particularly because the film doesn’t really have a great deal to say. It’s a sort of Nekromantik for the Xtube generation, but while Nekromantik was far more extreme in its depictions of sex and violence, it still had a point of view, something that Who’s Watching Oliver all too often lacks. In a recent interview, one of the writers claimed that he is “not so big into writing,” but that they “couldn’t stop laughing” while coming up with the dialogue. In a film that deals with such excessive violence, it doesn’t bode well to see it talked about so flippantly.

The music in these scenes, all jarring strings and thumping heartbeats, is eerily evocative, adding even more tension to the images on screen. In the rest of the film, the choice to use cheerful, big-band jazz – presumably to juxtapose against the violent imagery – is more campy than atmospheric, making the film veer too far into the realms of horror-comedy.

Who’s Watching Oliver is an exceptionally well made film, but the lack of subtext and deeper meaning makes it feel shallow and unconvincing. It’s disappointing, as the direction and acting are so solid that a stronger script would have elevated the film into something far more artful and interesting. The best way to view the film is as a vehicle for Richie Moore and Russell Geoffrey Banks, both of whom have some excellent work on display here. Fans of “extreme horror” will undoubtedly find lots to enjoy, but even for those who aren’t, Moore and Banks are two talents that are certainly worth watching out for in the future.