Who’s the Real Puppet in Amazon Prime’s ‘Silently Within Your Shadow’? 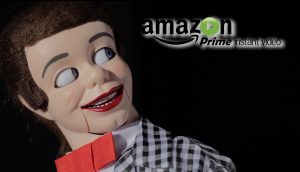 Following international screenings at the best part of 50 fests plus a 10-venue whirlwind tour of London, Scott Lyus’ perturbing psychological horror short, Silently Within Your Shadow, is available on Amazon Prime as of May 26.

Written by Lyus and starring Sophie Tergeist, Byron Fernandes and the iconic Bill Moseley, Silently Within Your Shadow relates the tale of Lucette, a promising young ventriloquist as she navigates an increasingly bizarre love triangle. Her boyfriend Jas becomes concerned about Lucette’s worrisome relationship with her puppet, Hugo. To Jas, Hugo’s just an inanimate piece of pine but to Lucette he is far from just a dummy, and possibly more real, and pulling more strings, than anyone could imagine.

Hugo’s voice is provided by Moseley who brings a stark sense of dread and darkness to Lucette’s perturbing puppet.

Lyus is currently hard at work on post for his latest project, the short film Echoes of the Passed, which you can find out more about on Twitter. In the meanwhile, we’ll leave you with the trailer for Silently Within Your Shadow which is sure to have you heading over to Amazon Prime…. You’d be a dummy not to….