WHAT WE DO IN THE SHADOWS HAS BEEN RENEWED

FX’s What We Do in the Shadows still has a few episodes left in its first season, but the network has got a taste for blood now. The vampire mockumentary has already been renewed for a season season. 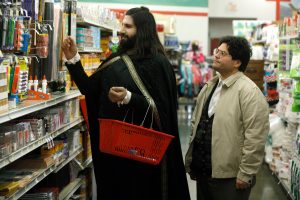 Following the day-to-day lives (or should that be deaths?) of three ancient vampire roommates, What We Do in the Shadows is based off the 2014 film of the same name directed by and starring Taika Waititi and Jermaine Clement. While the film is set in the city of Wellington, New Zealand, the TV series relocated to New York’s Staten Island. The IT Crowd’s Matt Berry stars alongside Natasia Demtriou and Kayvan Novak.

The second season of What We Do in the Shadows is slated to air in 2020. Are you finding the first season dead but delicious so far?