WHAT HIDES WITHIN: Book Review 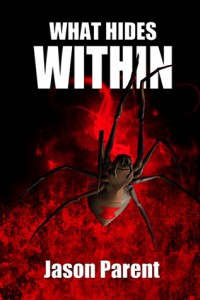 I will never look at a little spider with the same nonchalance again and I mean ever. I don’t mind saying that while reading this book and since finishing it, if I get a little tickle up the nose or in my ear, no shame attached – my finger is straight in there or up there. Just in case because well, you never know do you. And if I go through a strand of web, what quickly follows is almost a dance of epic craziness to make sure there’s nothing on me, with full slaps, the lot.

I loved this book, the characters were brilliant, the dark humour had me in stitches at times and just as I felt it was going a little flat after the half way mark, the direction changed and a fresh impetus reinvigorated the story. Almost perfect, funny as fuck, I mean the humour was dark and I highlighted loads of paragraphs that made me laugh.

There’s a couple of stories running in parallel we’ve got the murder of a child being investigated by the Police, there’s a bomber going round blowing shit up and then there’s Clive who attempts to paddle his canoe under a bridge and goes straight through a cobweb of seriously cringing proportions. Then his ears blocked with, yep you guessed it, Jesus wept I wasn’t scared of spiders before but I bloody well am now thanks Mr Parent.

What follows, well he’s hearing voices so a trip to the doctor is the order of the day and wait, still waiting, hours later – the Doctor will see you now ‘That’s nice of him. I was rather enjoying watching the wall. Captivating stuff’. What happens then is a hilarious interchange with a true ‘fucknut’, Dr Allen and mostly Clive’s sarcastic humour is relegated to his own mind but damn is he funny.

Another one was when his brain surgeon took part of his skull off, gets something in his eye, turns to wash it out and steps back to the sound of porcelain being pulverized underfoot. “Where’s the skull piece?” he managed after a hard swallow. Oh fucking dear.

What Hides Within is a quite brilliant story that mostly kept me entertained all the way through, the sarcastically dark humour was wicked and the ending left the door ajar for a follow up. This is my second read from this author after the short story in the Bad Apples anthology and I’m now looking forward to more.