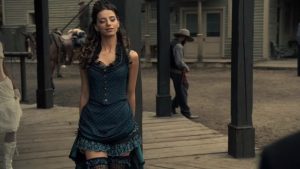 Ted Bundy flick Extremely Wicked, Shockingly Evil and Vile continues to build a strong cast, with the latest name to be added being Angela Sarafyan, pictured as Clementine Pennyfeather in HBO’s Westworld.

Sarafyan will play Joanna, a close friend of Bundy’s girlfriend Elizabeth Kloepfer (Okja’s Lily Collins). She joins a cast that also recently added Oscar nominee John Malkovich, who will play Judge Edward Cowart, the man who presided over Bundy’s 1979 trial and ultimately sentenced him to death. Bundy, who murdered at least 30 young women and girls throughout the 1970s and was executed in 1989, is played by onetime High School Musical heartthrob Zac Efron.

The wonderfully-titled film is told from the perspective of Kloepfer, who knew nothing of Bundy’s crimes whilst living with him.

The film was scripted by Michael Werwie, and is being directed by Book of Shadows: Blair Witch 2 director Joe Berlinger, who has also produced and directed a number of true crime documentaries.