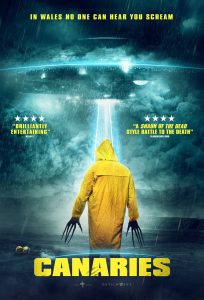 A rip-roaring trailer and a poster with a pretty great tagline herald the coming of Canaries, a Welsh sci-fi horror comedy which will debut at Cannes this month.

The feature directorial debut of filmmaker/actor Peter Stray, the film is set on New Year’s Eve in the Welsh Valleys. A group of friends are getting together for the annual festivities, but soon find themselves amidst an invasion of hostile, time-travelling aliens.