WE ARE STILL HERE: Film Review 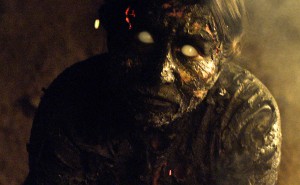 Synopsis:
In the cold, wintery fields of New England, a lonely old house wakes up every thirty years – and demands a sacrifice.

As much as I love catching up on all the latest films the horror genre has to offer – this year already having been particularly delectable – there’s still nothing quite like reviblsiting cult guilty pleasures from the good old ’70s and ’80s. Whilst first-time director Ted Geoghegan certainly serves up an abundance of originality in We Are Still Here and he continues to affirm that his debut was never intended to be a throwback or homage, it magically teleports us to the late ’70s, most likely thanks to cinematographer Karim Hussain’s trusty keen eye. If you’ve seen Karim’s work on films like Hobo With a Shotgun or Antiviral then you know the kind of treat you’re in for. 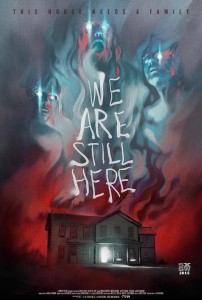 Inspiration from Fulci’s The House by the Cemetery is immediately apparent whilst the snowbound setting is particularly reminiscent of The Shining yet We Are Still Here is shot almost entirely in daylight, something that is quite a risk when it comes to genre movies but it works amazingly well. The most refreshing aspect of the film, for me, was the decision to go with a predominatly senior cast (Barbara Crampton, Andrew Sensenig, Larry Fessenden and Lisa Marie) as, being in their fifties, they really think they’ve got a grasp of what the world is until they are faced with the unexplainable. We are so used to seeing teens shrieking their heads off as they flee from some knife-yielding killer that Crampton and her co-stars’ reactions serve up such a revitalising change from the norm.

Would We Are Still Here have worked with a predominantly younger cast? I’m sure it probably would have held up and certainly would have been feasible, but that kind of stuff is totally overcrowding the market right now so Geoghegan found just the right hook and the right corner of the market to ensure his debut stood out from the rest of the supernatural flock. Other recent genre films that made that same wise decision casting veteran protagonists include Alejandro Hidalgo’s The House at the End of Time or Adrián García Bogliano’s Late Phases, both highly effective genre features.

And the veteran actors involved couldn’t have made Mr. Geoghegan prouder, I’m sure! Crampton is as astounding as ever as the grieving emotional introvert whilst her husband Paul (Sensenig) just wants to put everything behind him, hence the change in abode. Such opposing reactions to the loss of a child result in some outright enthralling confrontations and that’s before Fessenden and Marie’s New Age characters appear on the scene to try and help out, only to ultimately add salt to the wounds. The biggest applause has to go to Monte Markham who puts in a wickedly astute performance as the apparently amiable yet creepily conniving neighbour. Having said this, I couldn’t help feeling his character revealed way too much of the house’s history way too early on. As great as that early scene was I just feel that the whole plot would have been that much more intriguing had certain things been revealed a tad later rather than sooner.

Whilst the film is quite the slow burner for the first hour it was the final unflinching reel that knocked me for six. It’s not that I’m a gore junkie per se, but both the supernatural and bloodthirsty effects are absolutely, and literally, mind blowing once they kick in and there’s no time for blinking. It’s no surprise the man behind the effects, Marcus Koch just took home the Best Special Effects Award at Fantaspoa.

Recapitulating, We Are Still Here could have gone down the same old, same old supernatural road as so many others but Geoghegan cleverly keeps things fresh with his shrewdly devised characters, stellar performances and plenty of unorthodox twists that will keep you guessing right up to a climax that’ll knock you sideways. Fifteen years in the movie business has clearly rubbed off on this first-time director as he’s certainly come up with one of the most unique supernatural yarns of the last few years.