We Are Still Here Director Heads into a Satanic Panic 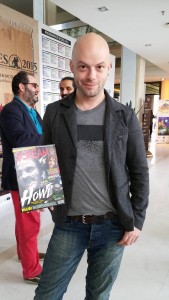 Ted Geoghegan, the director of supernatural-horror We Are Still Here has got the ball rolling with his next feature, which will be titled Satanic Panic. The film’s script will be written by the author Grady Hendrix, whose non-fiction has appeared in magazines that include Variety, Time Out and The Village Voice. With regards to fiction, his novel Satan Loves You is described as “the second-best feel good book about hell of 2011.” Anyone know what the number 1 was?

Synopsis:
[Satanic Panic will] centre on a minimum-wage delivery girl who is forced into a night-long battle with the rich and affluent leaders of a suburban community after discovering they’re part of a satanic cult.

When speaking about the upcoming film, Geoghegan has said that it will be, “Equal parts supernatural horror and survival thriller, the film hinges on smart, funny dialogue and a clever, surprisingly badass female hero.” The mix of supernatural horror and comedy definitely sounds interesting. With the producer of Cheap Thrills on-board, I’m sure you can imagine the tone the film may possibly adopt.

We Are Still here was one of the best and most unique haunted house horrors for a while and this certainly sounds promising. More news as it comes!