You are Being Watched in First House of Salem Image 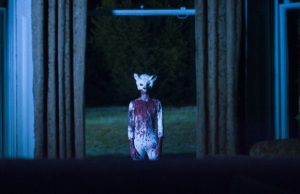 This creepy still (right) is the first released from upcoming occult horror House of Salem. The film is one of many to be premiering as part of the stellar lineup at this year’s Horror Channel Frightfest in August.

A group of kidnappers become a child’s unlikely protectors, after finding out they have unwittingly been set up to take part in a deadly game of human sacrifice. As they start to uncover the truth of the safe house they find themselves trapped, they must battle demonic forces in the walls and uncover the terrifying truth of over a hundred years of murder in the name of the Devil.

House of Salem’s world premiere will be on Saturday, August 27th, on Frightfest’s Discovery Screen.