WATCH YOU SHOULD HAVE LEFT’S FIRST TRAILER 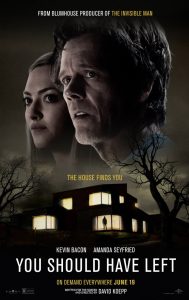 Kevin Bacon (Tremors, Friday the 13th) and Amada Seyfried (Jennifer’s Body, Twin Peaks) star in You Should Have Left, a new horror movie from Blumhouse and writer-director David Koepp (Stir of Echoes), and the first trailer teases a mind-bending tale.

Based on the novel of the same name by Daniel Kehlmann, the film follows Theo Conroy (Bacon), a successful man whose marriage to Susanna (Seyfried), a much younger actress, is coming apart at the seams thanks to her secrecy, his jealousy, and the shadow of his past. To try and repair their relationship, the couple book a vacation to a modern home in the remote Welsh countryside for themselves and their six-year-old daughter Ella (Avery Essex). But the perfect retreat descends into a nightmare as Theo begins to suspect that a sinister force within the house knows much more than he or Susanna have ever revealed… even to each other.

You Should Have Left will be available on demand everywhere from June 19th. Let the house find you by watching the trailer below.