Following on from his nightmarish experimental deathtrip Flesh of the Void, director James Quinn returns with more monochrome headfuckery with brand new short The Temple of Lilith. 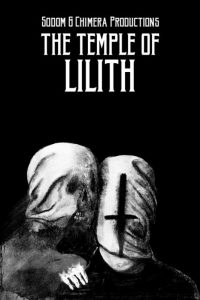 After the last witch of the south became ashes, never to be remembered, the mother of darkness, Lilith, rises from the ground to harvest the fruits of deadly sin, and set an end to the holocaust of the saints, the religious pandemic that tried to enslave and ultimately annihilate her kind. Planting the seeds of the goat into her skull, she goes her way, on a quest of darkness, to open the gates of hell, become one with the lord of flies.

As well as a score from Musica Non Grata, The Temple of Lilith also features music by Canadian doom metal band Dopethrone. The film is a companion piece to Sulphur for Leviathan, a 13 minute film focusing on a nun who wrestles with thoughts and fantasies of lust and blasphemy. The film, which Sodom & Chimera will release in 2018, is described as “…a controversial and disturbing, but calm and poetic experience that is heavily inspired by Andrei Tarkovsky, with a touch of satanism.”