Watch the Blue Light Attack from Beyond Skyline

We have an exciting 2-minute clip to share with you from the upcoming sequel Beyond Skyline and it shows us how the second alien invasion begins. Described as the “Blue Light Attack”, those pesky extra-terrestrials lure in humans with a mesmerising blue light so that they unwittingly board their alien ships.

Beyond Skyline follows a detective (Frank Grillo) as he fights to save his captured son from an alien warship. Joining Grillo in the cast are Bojana Novakovich, Iko Uwais, Callan Mulvey, Valentine Payen and Betty Gabirel. The film is directed by Liam O’Donnell, the scribe of 2010’s Skyline. 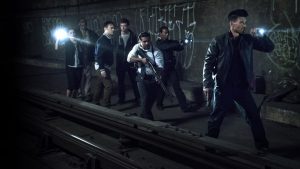 You can check out our review of Beyond Skyline right here. We thought it was an impressive and action-packed sequel which improved greatly on the lacklustre first film. It’s definitely worth checking out, so give this one a chance!

Be sure to catch the film when it is released on Digital in the UK and US on 15th December, before unleashing on Blu-ray and DVD in the UK on 8th January 2018.