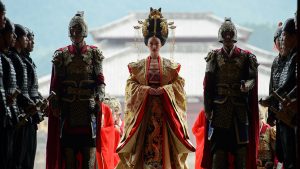 The Warrior’s Gate was an unexpected opener to the Horror Channel FrightFest weekend – even for a festival such as this one, which prides itself on unpredictability.  A big budget, family-friendly, martial arts comedy in the vein of The Forbidden Kingdom isn’t the kind of movie most commonly associated with horror festivals, but if anything, The Warrior’s Gate reminds us fans of fantastical cinema why we fell in love with it in the first place.  Think Karate Kid meets Crouching Tiger, Hidden Dragon, with a hint of The Last Starfighter, The Neverending Story and BMX Bandits.  Throw in some video game aesthetic and the EDM music all the kids are into these days, and you have an idea of what to expect from this adventure.

Directed by Matthias Hoene – known to most horror fans as the director of the underrated horror comedy Cockneys vs. Zombies (2012) – The Warrior’s Gate revolves around Jack (Uriah Shelton), a bullied teenager tasked with protecting Empress-to-be Su Lin (Ni Ni) from the clutches of the evil warlord Arun (Dave Bautista) in his suburban house after he comes into possession of an ancient box-cum-time travelling portal.  However, when Arun’s goons pay them a visit and kidnap Su Lin, Jack follows suit.  Upon arriving in ancient China, he teams up with her sworn guardian Zhao (Mark Chao), and together they embark on a journey to save the day.

The Warrior’s Gate is a movie made for adolescents more so than seasoned horror aficionados, but it’s good-natured innocent fun that will speak to the inner child of those who grew up loving the movies it’s reminiscent of.  Jack’s story arc from bullied video game nerd to triumphant action hero is pure feel good entertainment, like Daniel-san was in The Karate Kid. (Interestingly, this was co-written by the scribe of that film, Robert Kamen).  The comedic parts work quite well if adulthood hasn’t gotten the better of you yet, and the film supplies plenty of entertaining action throughout.

Most of the audience had mindless fun with The Warrior’s Gate, which makes it worthy viewing for the whole family.  If you’re looking for some light fun to counteract your darker viewing habits with then you can do a lot worse than The Warrior’s Gate.  The story is nothing new, but it’s told well nonetheless.