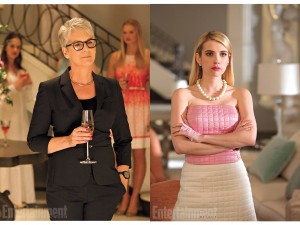 The royalty of horror have given us another teaser clip and it warns us all of two things to avoid. The first is never ‘lol’ about being followed by someone in a Devil mask and the second is make sure you don’t wear your fanciest dancing shoes.

Texting like mad in the clip, we see the phone then covered in blood and fall to the floor, not a great sign. We know comedy-horror anthology Scream Queens will immerse horror in a very modern and technological way.

Ryan Murphy, Brad Falchuk, Ian Brennan and Dante Di Loreto will executive produce the show, and it will be released through 20th Century Fox TV.

Scream Queens will air on FOX in the fall of this year.