There are plenty of different cover and format versions of Andy Muschietti’s It, and now we have the first look at Walmarts’ exclusive design for its It DVD. Unsurprisingly, Bill Skarsgard’s Pennywise dominates the cover as he lurks behind the iconic and infamous red balloon.

Synopsis:
A group of bullied kids band together when a shapeshifting monster, taking the appearance of a clown, begins hunting children.

We thought It was an excellent, funny and surprisingly touching adaptation of the epic King novel, so if you haven’t seen it yet, what are you waiting for?!

Check out our review of It right here and be sure to catch It when it is released in the UK on 4K Ultra HD, Blu-ray, DVD and Blu-ray Steelbook from 15th January 2018. 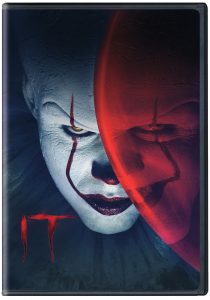 Here’s the full list of special features:
* Pennywise Lives! – Discover how Bill Skarsgård prepared to portray the primordial creature known as Pennywise the Dancing Clown
* The Losers’ Club – Get up close and personal with the teenage stars of “IT” as they bond together during the production
* Author of Fear – Stephen King reveals the roots of his best-selling novel, the nature of childhood fear and how he created his most famous monster, Pennywise
* Deleted Scenes – Eleven deleted or extended scenes from the film