First to answer our questions is Lennie James, who plays Morgan: 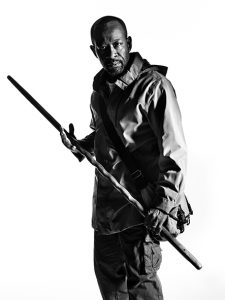 SCREAM: How is it getting to work with Melissa McBride this season?

Lennie James: I like to work hard to make it easy and that is what happens with Melissa. I genuinely believe if you asked any of the actors on set who do you most enjoy doing scenes with, every person would say Melissa. If she were English, she would be a Dame and she would be as close as we could get to Knighting.

Where is Morgan and Carol’s relationship at the start of Season 7?

Morgan has a huge amount of respect for Carol. He sees in her himself, mostly his pain. He gets her. What pulls Carol away from him is that it is uncomfortable for someone else to see your pain. That’s where they are at the beginning of this season. Morgan has not caused the dilemma Carol is going through. Carol was going through that before he arrived, but he hasn’t helped it.

Morgan doesn’t trust anybody, but that doesn’t mean he is not willing to trust people. He has had plenty of examples of how good and how dangerous trust can be.

We get to see the Kingdom this season. Is it a fairy tale or a dangerous illusion?

Why does Ezekiel call himself “King”?

If you’ve got a pet tiger, you can be whatever you like. In this world, all the leaders we’ve come across to a great or lesser extent are playing a role. Every time Negan comes out to play with Lucille, he’s putting on a show. The guy we’ve been following is a town sheriff who wears a holster, with a gun at his side, and a cowboy hat. Even Deanna was playing the senator in a world where there is no senate.

What is one of the things you are most excited for this season?

Me riding the horse. It’s the thing that tells me I’m not in Kansas anymore. I’m a kid from South London. There are not too many horses there. The idea of me jumping on the back of a horse and riding around is just the most exciting day every chance I get to do it. 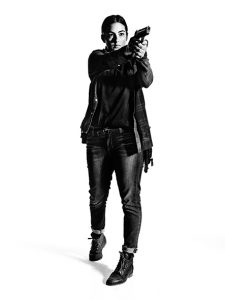 Next up is Alanna Masterson, who plays Tara:

SCREAM: Tara was last seen going on a run with Heath.

Alanna Masterson: Tara is doing what she can to get back to Denise and her family at Alexandria.

What makes Tara such a good character?

She sees the good in everyone, even to a fault. Tara is optimistic, and she’s optimistic when it’s hard. That’s who she has become. You are either going to cry about it or you are going to get up and do something. You are going to try and do whatever you can because the world is more important than just you. You have to look out for other people and take care of them. She’s a fighter.

How has the introduction of Negan impacted the world of The Walking Dead?

You’ve watched these characters grow together, fight together, and stick together through everything. Now you’re a little bit worried that maybe they are not going to make it through. Maybe they won’t stay together because there is such a force of evil coming from this man. He is the biggest threat.

What does the future look like for the group?

It’s pretty uncertain. You think if Rick is leading them, everything is going to be okay and everyone is going to do what they can to keep the group together. This is the first time you are unsure and you don’t know if anyone is okay.

Lastly today, we hear from Josh McDermitt, who plays Eugene: 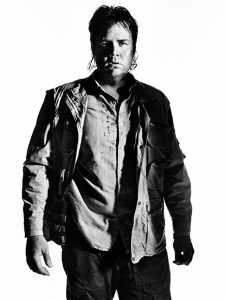 SCREAM: Did Eugene overcome his self-doubt when he volunteered to drive the RV alone?

Josh McDermitt: It was just another moment for him to display that newfound confidence. That’s exciting to see a guy who I feel like represents a lot of what most of us would be in the apocalypse if it ever happened – someone with no skills hoping someone protects them or they might die. Then to become a man of action, a man who will step up in the face of danger. In those situations, you have to continue to build your confidence.

How has Negan changed landscape of the world the group thought it knew?

We thought we were in this nice little community where our biggest worry was we don’t have enough food. Negan came in and made this world much larger than we thought it was, while making our world a lot smaller.

What makes Negan so threatening?

It’s a pretty sadistic game that Negan is playing using a child’s game to kill someone. It’s so nonchalant and everyday for him. It lets you know you are not in charge. You are not the ones pulling the strings anymore. This is a scary time for this group.

Is Negan unpredictable or does he have a plan?

This isn’t random. They are not one step ahead of us, they are 10 steps ahead of us. This is the ultimate chess match, and we don’t realise we are playing chess, and they do.