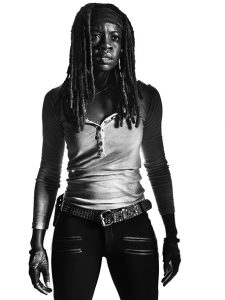 SCREAM: What was a defining moment for Michonne last season?

Danai Gurira: Now that she has a whole new level of intimacy attached to who she is and how she functions in the world, that is definitely an adjustment for her. In some ways, it’s made her even more aggressive. This is a man, from the beginning, she could respect.

Were they wrong in attacking the Outpost?

It is hard to have simplistic morals and standards when you are dealing with a world that is this hostile. In terms of what happened, they were actually trying to help a situation not happen. They’ve had a lot of experience of people doing really terrible things they trusted, and they should not have trusted these people. It was smart, but they didn’t realize the magnitude of who they were up against.

Why is meeting Negan and the Saviours such a humbling moment?

Why is Michonne defiantly staring at Negan as she sits at his feet?

She is in a moment of utter powerlessness, which is beyond maddening for her. There is certainly rage and a desire for something to just give them a little bit of a way out of this, but there really doesn’t seem to be one. The only thing she has is her eyes.

What makes the game Negan plays with them pure torture?

It’s a plausible circumstance that someone could do exactly what that man is doing. We are not in a position at that moment to make it any different from what it is. It’s the juxtaposition of Eeny Meeny Miny Moe with I am about to kill one of you – it’s horrific.

How does Negan change the landscape of The Walking Dead?

They have never seen this type of force in this world yet. The game has changed. We hope we can still play it.

And now to hear from Melissa McBride, who plays Carol

SCREAM: How should fans prepare to watch the Season 7 Premiere? 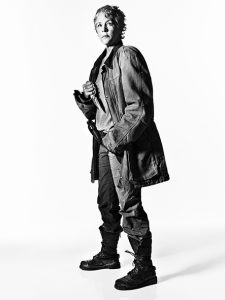 The persona that Carol is taking on is a little bit different than the one she had in Alexandria. She has a little more sass.

What does Ezekiel add to The Walking Dead world?

What this character has in the Kingdom is something very different from Terminus and from Woodbury, and something that Alexandria maybe could become. This colourful leader, from the goodness in his heart, genuinely wants a better world for the people in the Kingdom. What motivates him, how he follows through, how he takes care of the people – I don’t think the fans will be disappointed in Ezekiel or his sidekick.

How is working with Khary Payton?

Once Khary gets the hair on and his voice going, it’s an amazing transformation from the actor to the character. Working with Khary is super special. When anybody comes into The Walking Dead family, we like to embrace them and make them feel like they are home. I don’t know how they gather up the kindest, most interesting, wonderful people to work on this show.

Describe Carol and Morgan’s relationship with each other…

Carol and Morgan are in conflict with one another with their points of view. Morgan himself is so kind. He doesn’t have a mean bone. Carol is kind too, except she can’t go to that place. It’s going to be interesting to see these two together this season.

And finally for today, here is what Austin Nichols, who plays Spencer, has to say about Season 7: 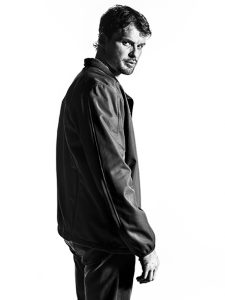 SCREAM: Last season, Spencer and Rosita appeared to be starting a relationship…

Austin Nichols: It was a really complicated relationship at the end of last season. We know that there has been a physical thing, and Spencer asked her out on a date and she didn’t show. There is tension there. She doesn’t understand him and maybe she doesn’t want to.

Why has Spencer always questioned Rick as a leader?

Spencer is walking this line of trying to do the right thing, trying to walk the line with Rick, trying to be true to what he thinks he should do. I hope he comes off as a very conflicted, interesting, smart guy. It’s intense playing Spencer. It’s intense being on this show. It’s an intense world they live in.

When did it feel like you were back to work on The Walking Dead this season?

I didn’t want to read the first script. I knew we were back at the table read, and then it was the ticks.

What are you most excited about for this season?

We are a team. We have got to help each other out and be there for each other. It’s the way to be.