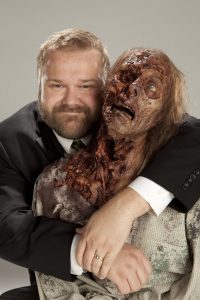 The Walking Dead creator Robert Kirkman has parted ways with AMC, abandoning a deal he had in place with the network to develop a slate of new shows, THR have reported. Kirkman – who also saw his comic series Outcast adapted for TV – left the home of The Walking Dead’s screen incarnation in favour of a move to Amazon Studios, with whom he and his Skybound Entertainment company have entered into a “sizeable two-year overall deal”.

The new venture will see Kirkman developing TV projects exclusively for Amazon’s Prime Video platform, which will have a first-look deal with Skybound. The deal also sees Kirkman reuniting with former Fox International Channels head Sharon Tal Yguado, who was instrumental in bringing The Walking Dead to the screen, and developed Outcast for television before it was published. Tal Yguado joined Amazon in January as head of event series, focusing on science fiction, action, fantasy and horror.

“At Skybound Entertainment we strive to tell the best stories in the most unique and creative ways in an effort to always break new ground,” Kirkman told THR. “A forward-thinking company like Amazon is the perfect home for us. Their new foray into genre fiction has us at peak optimism for what can be accomplished during this unprecedented partnership.”