The Walking Dead is Confirmed for an Eighth Season

The Walking Dead is gearing up for its seventh season, but AMC has already confirmed that an eighth will be on the way, probably in October of 2017. The first episode of season 8 will also mark the show’s 100th episode, so we can imagine that the end of season 7 will be a bit of a cliffhanger.

The first 8 episodes of season 7 will air this October before a mid-season break that will see the season continue in February 2017. We’re sure that a lot of fans are keen to see what season 7 holds, especially after that mighty end to events earlier in the year. Rick (Andrew Lincoln) and 10 other survivors found themselves in a grisly situation as Negan (Jeffrey Dean Morgan) plans to punish them for killing members of his troop. 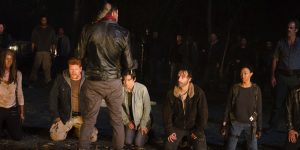 A clever, teasing POV shot placed the audience in the perspective of an unlucky character that seemingly meets their end at the end of Negan’s barbed wire-covered baseball bat. But, who was it?

Be sure to tune in to Season 7 when it airs on 23rd October to find out.