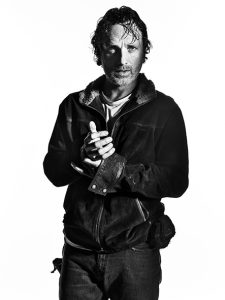 SCREAM: What amazes you most that it is Season 7 of The Walking Dead?

Andrew Lincoln: It amazes me that my boots are still attached to my feet.

Was it harder coming back this season knowing where you left off?

At what point in filming did you feel like you were back in production?

Pretty much the first day I felt it. Within about 20 minutes, I was in pain and said, “Ah… this is familiar. I must be home.” This particular episode as well because it’s a direct pick up. It feels like no time has lapsed from the hiatus. It’s all very, very fresh.

What is the hardest part about knowing the outcome of the Season 7 Premiere?

It’s the greatest television job I’ve had in my career, and it’s also the hardest because you know you’re saying farewell. It’s the Johnny Cash song: “everyone I know goes away in the end.” It’s unique in that way. It’s one of the excitements in that it keeps evolving. It has to by definition. We’re telling a story, and the story has to move forward.

What does the character Negan bring to the series?

We are seven years in and we are only unleashing now probably the greatest villain of the series. It’s a very thrilling and exciting time. It does feel like we are smashing everything and starting over.

What makes Negan more of a threat than those Rick has been up against in the past?

The Governor was much more about secrets. You didn’t know what the Governor was doing. Negan is very clear. He is very open with the people he meets. There is a charm, but there is a terrifying logic as well.

Has Rick met his match at this point?

Without a doubt he has, absolutely. Everything is changed. The playing field has irrevocably changed.

What does Jeffrey Dean Morgan bring to portraying Negan?

Jeffrey Dean Morgan is amazing. He feels like a presence who has always been here. That’s how easy it has been for his assimilation. He’s also having a lot of fun, which is key to this kind of role. You need to be having a great relish. I love acting with him. He’s so in it, and he makes great choices.

How do you hope the audience feels after they watch the Season 7 Premiere?

I hope they recognise the effort and the commitment that everybody – crew and cast – has put into this returning episode, like always. It’s palpable.

And now to hear from Norman Reedus, who plays Daryl… 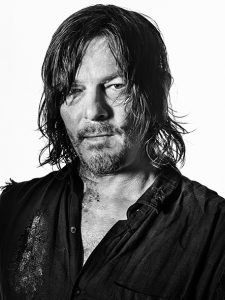 SCREAM: As they kneel, what does the group realise about the world now?

Norman Reedus: They realise they are not driving the car. There is somebody else who has a lot more territory than they do who is calling the shots. It’s super interesting and great that there is a character that is going to put fear into them. One of my favourite parts of the Season 6 finale is watching Rick be not in control. Rick has lead these people for so long and he might have just lead them all into the water to drown.

What does Daryl realise?

Mistakes will end your life.

What makes Negan more dangerous than anyone this group has come across?

Negan is a cold-blooded killer and he’s got the numbers. He’s got an army of people who all call themselves Negan. They are doing everything he says. There’s no way around that right now.

How is Negan able to Stop this group in its tracks where others have failed?

Fear. Fear is a bigger motivator than love or revenge or anything else. He is putting fear in people and that does wonders. It is particularly cruel because he uses a nursery rhyme. He’s not remorseful and it’s not personal. It’s just going to happen… just to keep the order.

What does the future look like for the group?

It looks really bad. It looks like they are about to have a complete change of lifestyle. We know Negan has people, but we don’t know the expanse of his tyranny.