WAITITI PROMISES WE’RE WOLVES WILL HAPPEN BEFORE WE DIE

Ever since What We Do in the Shadows rose from its coffin in 2014, fans have been gnashing their teeth in anticipation for a sequel. The film’s writers, directors, and stars Taika Waititi and Jemaine Clement teased that the follow-up would be called We’re Wolves and would follow the pack of werewolves (not swearwolves) led by Rhys Darby in the original film.

But despite the appearance of two spin-off television shows, Wellington Paranormal and FX’s What We Do in the Shadows, that sequel has yet to materialise. And, sadly, we may still have a while to wait. 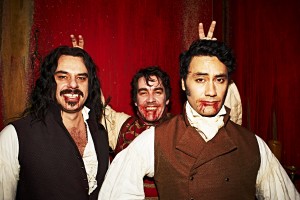 Waititi recently explained that he and Clement are eager to make We’re Wolves, but their busy schedules are currently making it impossible. However, he jokingly guarantees that we’ll see it before we die. So that’s good news, right?

In the meantime, the season finale of What We Do in the Shadows airs on FX on Wednesday, May 29th in the U.S., while British audiences can follow the show on BBC2. The series has already been greenlit for a second season, so at least we won’t be short of hilarious vampiric antics anytime soon.