Someone tipped me off to this story coming on Facebook and to the fact that Mr Garton was looking for some reviewers to pick this up and give it a little whirl. I have read a couple of other things from Ray Garton. His short story, The Guy Down the Street in Widowmakers, and A Flat and Dreary Monday Night in Cut Corners Volume 2, from Sinister Grin Press.

I absolutely loved them so jumped at the chance of reading Vortex. This book was originally published 2014 by Cemetery Dance in a limited edition and has just become available on EBook. Judge for yourself from the review whether you should pick it up or not.

Synopsis:
Karen and Gavin are private investigators. They are hired by famous horror author, Martin Burgess to have a look around Mt Shasta. A mysterious mountain surrounded by stories of all things spiritual and even some evil. There is supposed to be an ancient race living underground.

It all sounds like rubbish but Martin has money to burn and Karen and Gavin want to earn it.

When they actually do discover some strange goings on, they soon come to realise that maybe all the money in the world isn’t worth it after all.

Maybe someone does live under the mountain.

Right, let’s talk characters. Main ones would be Karen and Gavin. Two private investigators that met after being brought together by Burgess. They live far apart and only work together when Burgess has a job for them. They secretly have a thing for each other but it never develops. They are really good at their job. You only see them for a while in this novella but you instantly like them. They are hardworking, smart and seem to have a lot of hidden talents still to be revealed.

Burgess himself seems a likeable fella. A successful author with money to burn, he seems to like getting involved in mysteries and trying to dig out the truth. Crystal is his girlfriend. At first you would think she was in it for the money but she seems ok. Gertie and Penny and Pyk are all other mainish characters but to tell you about them would give things away and as always I’m not prepared to do that. Same goes for the characters on the evil side. You just have to read and learn.

The plot? It’s old skool. A mysterious mountain with mysterious goings on that are all kept secret. People disappearing. People becoming rich for no reason. Strange vehicles in and out of town. Everyone turning a blind eye. This has all the ingredients for an old time sci-fi horror film of times gone by. It has a certain atmosphere about it that gives you a wonderful picture in your imagination. I’m thinking War of the Worlds, (the original 1953 version, not that Tom Cruise rubbish), I’m thinking Close Encounters of the Third Kind. I’m thinking Twilight Zone. I could go on and on but this is the fantastic atmosphere you can expect from this story. 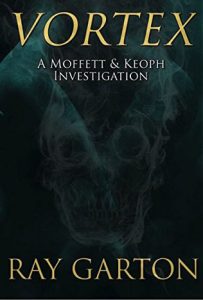 Although not what I would call original in its style, it is just superb. Ray Garton has written this book in such a way that the story, as well as being a horror, is exciting. It’s exhilarating and full of tension. It’s very fast paced, packing a lot into the story in a short time. You get to know the characters so well by a quarter way through the book. In a novella this is some going. You know exactly who are the good guys and who are the bad guys. Nothing complicated at all. Just good clean fun and scares.

At this point I am not aware whether the characters of Karen and Gavin have featured in other stories, or are likely to in the future. I sincerely hope they have and will be. They are brilliant, and I get the impression that Mr Garton would have a box full of stories and adventures for them.

To summarise: grab some snacks, a couple of drinks, lock the door and close the blinds. When you start to read this little sci-fi horror mystery, you will not want to be disturbed.