Volumes of Blood: Horror Stories Teaser is Brief but Sick 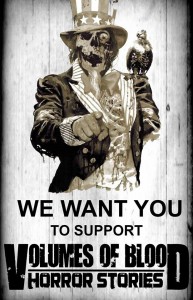 This trailer for upcoming indie anthology Volumes of Blood: Horror Stories doesn’t give much away, but kicks off with a nasty stabbing and leaves a bitter taste with a troubling, ominous final moment.

The film reunites the team behind last year’s Volumes of Blood, who promise more bloodshed this time around. This was in fact, they key pitch behind producer/director PJ Starks’ crowdsourcing campaign for the film.

This time around, Starks has gathered upcoming directors including Brad Wiebe (A Brush with Death), Nathan Thomas Milliner (short The Confession of Fred Krueger), John William Holt (The Dooms Chapel Horror) and Justin M. Seaman, the man behind upcoming ‘80s throwback The Barn, which looks awesome.

No details yet on the tales being told, so keep an eye on the film’s facebook page for updates.