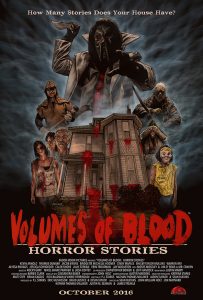 The anthology Volumes of Blood: Horror Stories delivers on what the title promises, as gallons of grue and heaps of gory special effects are on display throughout the film’s tales. This sequel to 2015’s Volumes of Blood also delivers some chilling content, as well, with a group of talented writers and directors joining forces.

This Owensboro, Kentucky-filmed independent work starts off with a warning that it is “a true labor love for the genre, produced by horror fans for horror fans.” Usually a disclaimer like this feels more like an apology once movie is viewed, but in this case, it is indeed the declaration of a celebration. References and in-jokes are on display, but not so much that they overwhelm or wear out their welcome.

Most of the stories involve some level of humour, usually of the dark sort, but this reviewer would stop short of calling it a horror comedy. Some of the gore gags do lean toward the cartoonish, but there is enough serious horror on display to keep things from going overboard.

With a strong emphasis on slasher stories, Volumes of Blood: Horror Stories worked best for this reviewer when it stretched beyond that sub-genre and delved into more imaginative tales. For example, Justin M. Seaman’s “The Deathday Party” sees a senior couple celebrating the husband’s birthday in a decidedly uncivilised manner, while Jon Maynard’s “Blood Bath” explores a wildly improbable — but very savage — situation involving a deadly bathtub. John William Holt’s “Feeding Time” is a monster-in-the-closet story with a nice twist, involving an insurance salesman dropping his guard to help a young woman in distress. Nathan Thomas Milliner’s “Fear, for Sinners Here” is a Christmas tale refreshingly not involving a killer Santa. Rather, it serves up a revenge story involving a stabbing with sharpened candy canes, and it delivers arguably the most chilling end of all the anthology’s segments.

Things can be a bit confusing at times. For example, the framing arc “Killer House,” directed by James Treakle and involving a young couple touring a house that they are considering buying, doesn’t begin until after the second story instalment. The device of going through the building and seeing what horrifying secrets its rooms hold is a nice touch, however. 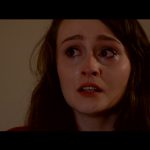 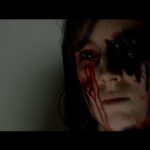 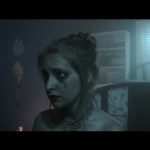 The other segments are opener “Murder Death Killer,” helmed by Nathan Thomas Miller, in which some small-time criminals unwisely ignore the eerie tale of a local legend. It connects to the following story, P.J. Stark’s (who also produced Volumes of Blood: Horror Stories) “Haters,” which has a couple of highly opinionated moviegoers irritating an usher, with dire consequences. Sean Blevin’s “Trick or Treat” brings back a slasher character from the first Volumes of Blood film.

Everyone involved with special effects and make-up did a bang-up job, and gore-hounds will find plenty to love on frequent display. Body parts, both internal and external, and the red stuff are plentiful.

The direction is quite good throughout, and the screenplay by Blevins, Milliner, Starks, and Jason Turner is solid overall, though instances of weaker dialogue crop up on occasion. Performances range from strong to somewhat corny, but overall, most of the performers appraise themselves well. 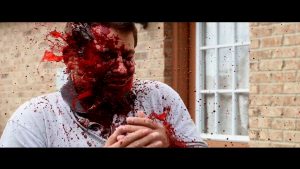 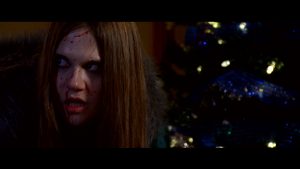 The filmmakers behind Volumes of Blood: Horror Stories obviously know their stuff as fans, so make sure to keep a close eye and ear out for references. They also know how to put together an entertaining anthology on a low-budget. If plenty of grisly effects and a big-hearted approach to horror sound enticing, you will want to seek out this movie.