We’ve so far seen two brief teasers for upcoming anthology sequel Volumes of Blood: Horror Stories and while they’ve thrown up plenty of gory images, little more has been given away. This newly-released clip may be gore-free, but it does provide a nice set-up to one of the tales, and an official synopsis has arrived to let us know what’s in store.

As with the first film, creator PJ Starks took to crowdfunding to get the film made, promising to up the ante from 2015’s Volumes of Blood in terms of bloody mayhem. This time around, Starks has gathered up-and-coming directors including Brad Wiebe (A Brush with Death), Nathan Thomas Milliner (short The Confession of Fred Krueger), John William Holt (The Dooms Chapel Horror) and Justin M. Seaman, the man behind ‘80s throwback The Barn.

Synopsis:
A couple plans to purchase an old home, but would like one last tour before the closing. They’re guided around the estate by a creepy realtor that may have more in store than they bargained for. Searching floor by floor, they begin to discover the remnants of its sordid and terrifying past… A popular 80’s franchise gets a modern upgrade, but at what price? On Halloween night a teen left home alone meets a trick or treater that wants more than just candy. A door to door insurance salesman makes a Thanksgiving house call with monstrous consequences. Andrew and Sara are happily married and plan on spending some quality time together, but something sinister has other plans for their evening. Carol’s Christmas Eve turns into a fight for survival when a vengeful stranger isn’t feeling the holiday spirit. Lastly, a birthday party turns bloody when some unexpected guests drop by at the wrong time. Seven interwoven tales of terror, how many stories does your house have? 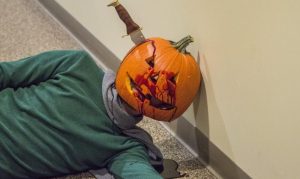 Volumes of Blood: Horror Stories will premiere at the Owensboro Convention Center in Kentucky on Saturday, October 29th. A distribution deal is yet to be struck, but a release is expected in mid-2017.