Vivieno Caldinelli and Matt Watts Take us Through a Portal To Hell!!! 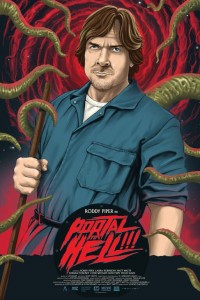 Director Vivieno Caldinelli and scribe Matt Watts’ nostalgia-filled short film Portal To Hell!!! was summoned up out of their shared penchant for classic ’80s genre benders. Starring the late, great wrestling superstar Roddy Piper (They Live) alongside Watts himself, Piper plays Jack, a brusque and recluse pro boxer turned maintenance man who discovers two tenants in the basement attempting to open an evil portal to welcome the dark lord himself, Cthulhu into our world.

Backed by the Harold Greenberg Fund’s Shorts-To-Features programme a feature length version is in the works but for now, in celebration of the world premiere at this year’s Toronto International Film Festival, SCREAM caught up with Caldinelli and Watts to discuss their outrageous Lovecraftian homage of biblical proportions…

SCREAM: How did you end up collaborating on this short and how did the project come together?

Vivieno: Well, we were friends before we worked on it and then Matt had this idea so he might want to take it from here.

Matt: I was in a very dark place. I wasn’t working very much and I was talking to Viv on the phone and I told him how I had an idea for this feature that’s sort of like a John Carpenter-directed version of Overboard. We talked about it for a bit and decided to do it as a short. So I started writing the short and would send it to Viv and he would send me notes and then we paired up with Andrew Rosen and Todd Brown and it just all came together. It took a couple of years but it worked out.

Is it true that you had Roddy Piper in mind for the lead role of Jack right from the start?

Matt: Very close to the beginning. Originally, when we were talking about a feature film, we talked broad strokes and we literally thought of Overboard via a sci-fi horror movie. Then, as we were writing a short it became very clear that the best person for the part was Roddy and we just started writing it for him regardless of whether we could get him or not. After that we tried to get him and it all worked out.

Vivieno: That was a huge process. That was literally a year from September to September, the whole process of courting Roddy. He came to Toronto about a year and a half ago or more and then we had a meet with him and we pitched the idea and he loved it. The problem was that the man was so busy. 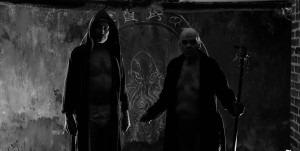 Matt: It was so hard to find a window and so many things had to line up so it was really difficult. But we did it!

So what did you see in Roddy that made him the perfect maintenance supervisor for an apartment block?

Matt: I think it was the same thing that was appealing to John Carpenter (if I may put us in the same category). Roddy was appealing to Carpenter for They Lived because he had more of an everyman quality about him and I think he only grew into that persona more. When you listen to the interviews with him he was a very soft-spoken and gentle guy, a real sweetheart and you get this impression that he just wanted to spend some time with his family but the profession he’d chosen required him to be on the road a lot. So for our character Jack, who just wants to read a book but keeps getting dragged into these day to day mundane things and then at the end has to step up and be a hero again, it just really suited Roddy as a person.

What specifically made you decide a portal to hell in the basement would make for a perfect plot?

Matt: I don’t even remember! I’ll tell you what I DO remember though. This was an old idea and I was in the shower. I was thinking about the movie Overboard and about Manhattan Murder Mystery, which is another film with Woody Allen and Diane Keaton. She believes that the neighbours were murderers but he didn’t believe her so I had this idea that this woman moves into a building and there were Satanists living there and they get down to the basement and there’s a big swirly portal and the maintenance man gets down there and says, “Right, you got me on this one!” That was sort of how the joke played in my head and that’s all I had. Then, as I expanded it into a feature idea, I thought it would be fun to do something Lovecraftian and I built it from there. 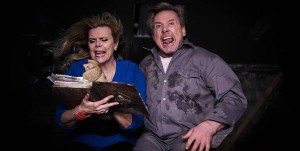 Whilst the short is full on comedy all the way through, will you be going to darker places with the feature length version?

Matt: There are touchstones because it’s hard when you do these kinds of films because everyone wants to lump you in with ’80s nostalgia and exploitation stuff, not that that’s a bad thing. With Portal to Hell!!! in the same way Attack the Block was kind of a love letter to Joe Dante films and stuff like that, to us we wanted to do the same but with Carpenter stuff. The joke isn’t the gore but it’s more of an enhancement on top of the story because it’s always about the mission, especially with Carpenter stuff.

Viviento: Yeah, it’s not just about the gore, not just about the laughs. It’s more about the story and the characters and their arcs. We set out to tell a good story with a beginning, middle and end rather than to just make a bunch of people squirm.

Matt: The feature will have that too. It’s a mission movie. It’s Assault on Precinct 13. It’s where a group of people stick together to stop one thing. I think the short is right in terms of the tone but not so much the story but it’s like a little slice or taste of what the feature will be like.

I’m guessing you went for Astron 6’s Steven Kostanki for the special effects to keep this same tone you are talking about.

Viviento: We’re good friends with Steve and we’ve had relationships with him for quite some time so he was the only person that we asked and we were thankful when he came on board. The man’s a godsend and he’s a fantastic guy to work with. Mainly the three of us got together to conceptualise what the effects would be and there was a lot of research in figuring different things out like different textures we liked and that kind of thing. Steve added a tonne of things to fill in the gaps and stuff like that.

Matt: He definitely brought his own sensibility. It was very collaborative and there was never any point where we were like, “No Steve! What are you thinking?” [laughs] He was very enthusiastic and showed us all kinds of stuff. It was fantastic.

Viviento: He’s got that work where even if it’s not his own film he still works as though it is his own. That’s something that’s worth its weight in gold. 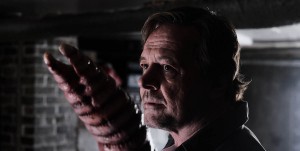 We’re all aware that Roddy Piper sadly passed away after the short was filmed. How did that change things in terms of the feature film and how will you move on and pay homage to him?

Vivieno: As far as the feature film is concerned it’s still full steam ahead. We’re still developing and writing it but we are close to finishing the script. But yeah, the tough part is going to be filling those shoes. We will find that person and it’s going to be more a case of us pursuing the people that we want rather than just trying to get the film made and packaged.

Matt: I mean, with Piper we wanted Piper and because of the scheduling difficulties there were times where we thought maybe we should get someone else but we stuck to our guns and we got him. He makes the short what it is so I think we have to take the same attitude moving forward and we have to get someone that Roddy would have been happy with playing that part. It was a difficult decision at first because firstly we are obligated to hand in a feature because of the financing from the shorts programme. There were a few days where we thought maybe we shouldn’t move forward but we realised that this was what we had been pushing so hard for for such a long time and it wasn’t fair to Roddy. Roddy will be all over it. It was written for him and his voice is in it and we’ll find places that we can make little homages to him. It’ll be for him and we have to see this through. In the way that he is always with us, looking over our shoulder (there just happens to be a giant poster of him behind them in the interview room), he’ll be in there somehow. He has to be, he’s so much a part of it…

We’d like to thank Vivieno Caldinelli and Matt Watts for speaking to us and we urge you to catch the short on the festival circuit. Portal to Hell!!! will be making its world premiere at the Toronto International Film Festival before heading to Fantastic Festival in Austin and Celluloid Screams in Sheffield. Details on all screenings can be found at the following links:

In the meantime we’ll leave you with the trailer to butter you up!