Synopsis:
After being confronted by a demon, a small child murders his mother with a cleaver. Twenty years later, while being transferred to prison, he breaks free and begins murdering victims in the German countryside. 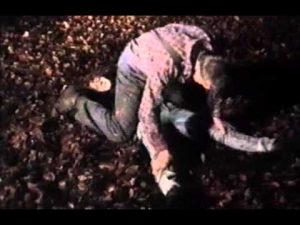 If there ever were a movie whose title was indicative of its content, it would be Violent Shit. Andreass Schnaas’ notorious splatter film lives up to its name in every sense of the word. It’s an unadulterated expose of violent acts set amidst extremely low production quality. This 1989 directorial debut caters to the moviegoer who craves bloodlust and senseless violence. If you’re looking for a story, then the best thing to do is exactly that—keep looking. Excessively gory, and completely self aware of its own faults, it seems to be in on the joke regarding its own absurdity. (IE—The title comes from a complaint from one of Schnaas’ friends accusing him of only wanting to make “Violent Shit.”)

Violent Shit is the story of cleaver-wielding murderer Karl the butcher-shitter, who spends most of the film hacking his way through helpless bystanders. When one cuts right to it, there’s no plot, and very little that constitutes an actual story. Despite the lack of a cohesive narrative, it still manages to have some form of continuity, as our lead goes from victim to victim. All throughout, it makes no attempts to be anything more than what it actually is, a schlocky, blood soaked, gore-fest. Many of the sequences and subsequent effects have the intention of being graphic, but only come across as inept and cheap. Schnaas pulls out all the stops, and leaves very little to the imagination. Included are scenes involving mutilation, cannibalism, and even castration.  Aside from bodies hacked to pieces, there also exists an unnecessary amount of padding to stretch the film out to a 75 minute run time. Throwing in pointless scenes of driving, and poorly written banter between victims’ moments before they’re dispatched. 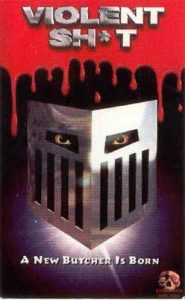 Low budget splatter and pointless filler aside, the mishandling of the camerawork is the final straw that gives Violent Shit its notoriety as an unintentional comedy of errors. It’s full of atrocious editing, and several practical mistakes easily caught by the naked eye. More than once the camera is either out of focus, or shakes around too much while establishing a shot sequence. This gives off the impression of someone’s home video, rather than an actual production. All the flaws contained therein are impossible to overlook, yet add to the appeal that this particular entry holds for many. Saying something is ‘so bad it’s good’ is a phrase that gets used way to often. Here, that expression seems like an accurate assessment. For what it’s worth, it doesn’t fall into the trap of being generic, or rely too heavily on many of the typical slasher tropes from the era. What it lacks in aesthetic, it makes up for with originality and moments of nonsensical mayhem. Since its release, 3 sequels have followed, as well as a reboot from Italian director Luigi Pastore in 2015. It appears the legacy of Karl the butcher hasn’t ended just yet.