Victor Crowley Gets a 2018 Release Date

If you haven’t managed to catch Adam Green’s secret Hatchet instalment, Victor Crowley, you will be glad to know that the film will be officially available in 2018. Dark Sky Films took to Twitter to make the announcement, with an exact release date promised to arrive soon. Originally, Victor Crowley toured from August to November after it was revealed that Adam Green had made the secret follow-up. 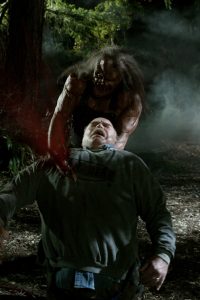 Set a decade after the events of the first film, Victor Crowley is resurrected and heads out on another bloody killing spree.

The Hatchet films are great because they’re as gruesome as they are fun and don’t take themselves too seriously. The fourth film is no different in this sense and is definitely worth checking out if you were a fan of the first three instalments.

Victor Crowley comes from writer-director Adam Green and sees Kane Hodder returning to the title role. The rest of the cast includes Parry Shen, Laura Ortiz, Dave Sheridan and Krystal Joy Brown. Be sure to get your hands on Victor Crowley in 2018.